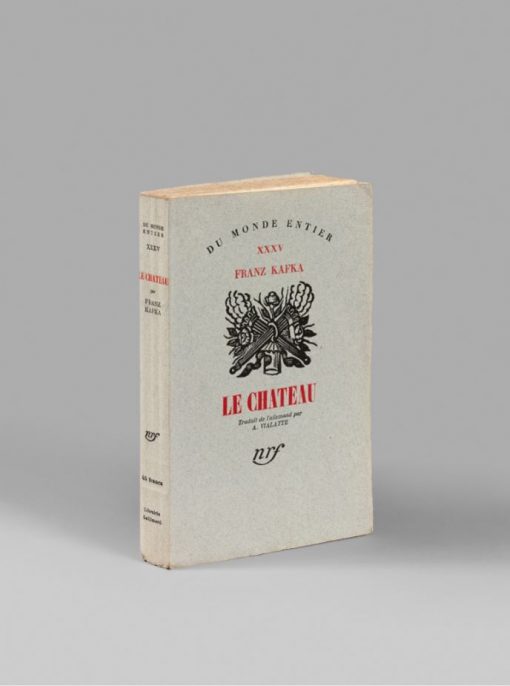 A precious and beautiful copy, from the leading copies,
preserved in its publisher’s wrappers, as issued.

One of 70 leading copies on Alfa, not numbered, with a special cover from the collection Du Monde Entier.

Written between January and September 1922, Le Château is the third and last of Kafka’s novels.

Le Château is generally considered to be one of the most representative of Kafka’s works.

K., a land surveyor, arrives one night in a village dominated by a castle, where lives a mysterious and invisible count. Wanting to establish himself in his master’s house, K. is met with a hierarchic proliferation of civil servants and lords, and a bureaucracy that imposes its incoherence and the absurdity of its laws everywhere. As he tries to navigate the necessary authorizations in order to meet the count, K. only generates incomprehension and mistrust among the villagers. When Frieda, the only person he got close to, abandons him, the land surveyor resigns himself to being excluded from the community.

This novel is open to many interpretations. Among the main ones, we should mention the Kierkegaardian quest of the land surveyor, haunted by the absence of God and in opposition with the ecclesiastical society that represents it.

It is also a criticism of the bureaucracy and the totalitarianism that comes along with it, a critic to which the governments of Eastern Europe responded to by delaying as much as possible lifting the ban on Kafka’s work. Also, it is about the quest and rejection of the father in a desperate revolt and then submission, with its arsenal of psychological explanations. Or finally, the rise of inhumanity, not only visible in the development of Nazism and Stalinism but also in the general attributes of modern society. With the perspicuity of his own experiences, Franz Kafka contributes in his way to the end of the traditional novel by transforming it, by means of the anecdote, into a criticism of daily life.” (Charles-Henri Favrod)

As much an influence on Sartre and Camus’ existentialism as on the criticism of totalitarianism bureaucracy, a symbol of Kafka’s complex relation to Judaism, this founding novel is a world of its own. Le Château had a universal impact because of what it says about the rationalized and bureaucratic horrors of the 20th century.

A beautiful copy, one of 70 on Alfa, preserved in its publisher’s wrappers, as issued.