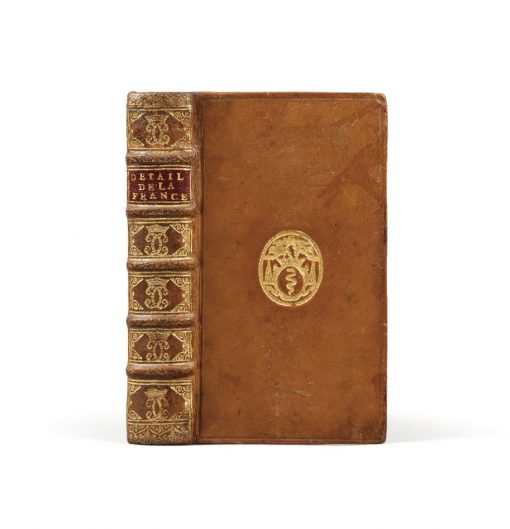 Voltaire chastised Boisguilbert who blamed Colbert for
“the languor that was starting to show in the State’s nerves”.

First edition with a consecutive pagination of the Œuvres by Boisguilbert ; the most complete edition. Two other editions with a non-sequential pagination were edited that same year 1707, a few months earlier. In the year 1707, another major work of political economy came out, “La Dixme royale de Vauban”.
Part of this text was published for the first time in 1695.

This is an important work that opened the way to the 18th century political economy.
This text is one of the first to protest against the economic system of the time and pleads for freedom of trade and agriculture. The Supplément is fundamental.

It lead to the decree of 14 March 1707 which condemned Boisguilbert’s book.

“Boisguilbert (1646-1714), being an administrator, had, like his friend Vauban, a deep knowledge of the people’s living conditions and was considered a “humanitarian”. Despite his sympathies for agricultural protectionism, he had largely given up on the mercantilist system [as pushed to its limits by Colbert] (Bluche). He attributed the slow population growth to general poverty, which was in itself a consequence of the fiscal policies and the obstacles hurting economic activity. Like Vauban, in a way, he predated Malthus’s theory on the co-dependence between population development and the availability of the necessary basic foods. He gained interest amongst writers who, after him, asked for agrarian reforms and a humane treatment of laborers, and accepted the “laissez-faire” philosophy of the authors of the second half of the 18th century” (Spengler).

In “Le détail de la France”, Boisguilbert gives one of the most extensive and consequential overviews of the consequences of permanent war and the disarray of the State’s finances. The reason for the diminishing of goods is clearly stated : the consumption of staples is ruined by the rapacity of the ones in charge, the unpredictable circumstances, the incertitude and injustice of the taille tax, the costly formalities of interior and exterior tariffs, the different abuses and frauds of the commissioners.

He defends the capital importance of consumption, which he considers as the starting point of all revenues.

Notwithstanding the curious historical information on the financial administration of his time that Boisguilbert gives us ; the sagacity with which he, beyond the abuses and privileges of all sorts, manages to defend the principle of tax proportionality, and the consequential benefits for the sovereign and the people, he wishes only to be considered of as one of the pioneers of political economy. All of the elements of the physiocrats’ doctrine can be found in his writings, which had great influence on the economic ideas of the 18th century.

Boisguilbert was close to Chamillart, Vauban and Colbert. Voltaire chastised Boiguillebert for blaming Colbert for “the langor that was starting to show in the State’s nerves”.

He was born in Paris on 14 February 1655. At the age of 10, he received the abbey of du Bec and the wealthy priory of La Charité-sur-Loire ; he became a doctor in theology in Paris and a member of the Académie française on November 3rd 1678, at the age of 23. He was a founding member of the Inscriptions et belles-lettres. Named assistant to the archbishop of Rouen in February 1680, he was appointed archbishop of Carthage, in partibus, on August 4th and ruled over the diocese of Rouen, of which he became the official head on January 27th, 1691. He died in Paris on December 10th, 1707. (O. Hermal, pl. 1298)

This important work that opened the way to the 18th century political economy comes from a great provenance, is remarkably well preserved et has always interested bibliophiles. It was sold 19 000 € in June 2008 (and unfortunately badly described 7 years later with a mistaken provenance).