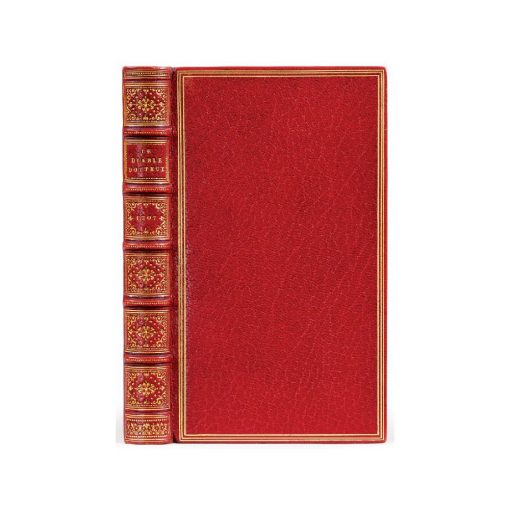 at the court and in town” (C. Parfait)

“It is one of the rarest French classics in a first edition”
(La Rochebilière).

“Extremely rare” first edition (Tchemerzine) of Lesage’s great novel that was “without contest one of the most considerable commercial successes of the 18th century” with the board from page 17-18.

It is decorated with the frontispiece engraved by Magdeleine Horthemels representing Dom Zambullo and the limping devil.

“The copies from this first edition are extremely rare.” (Tchemerzine).

Alain-René Lesage got his idea from the Spanish novel El diablo cojuelo by the writer Luis Velez de Guevara and developed it in a narrative text full of spirit, that would become universally famous.

It is a series of separate portraits that are not linked with one another. They are often interrupted by long digressions or tales inserted in the narrative itself.

In his book, Lesage explicitly diverges from his contemporaries.

What attracts him is the moral investigation undertaken by the great writers of the previous century, like de Bruyère and La Rochefoucauld and up to the Spanish picaresque novelists.

The “Diable boiteux” was a prodigious success. And a well-deserved one.

It is a criticism of all social classes and all social conditions. The traits scattered all over the text show finesse, depth, naiveté. Beaumarchais drew from one of the stories told in chapter IV to write his drama on Eugénie.

“It is one of the rarest French classics in a first edition.” (La Rochebilière)

Only around ten copy are currently reported.

The rarity of this edition is due to the fact that Lesage, having rewritten and enlarged his text of the Diable boiteux in 1726, abandoned the anterior edition (Henri Cordier, Essai bibliographique sur les œuvres d’Alain-René Lesage, Paris, Lehec, 1910, n° 58-1 ; Roger Laufer, « Essai de bibliographie matérielle », n° 1, in Alain-René Lesage, Le Diable boiteux, Paris, La Haye, Mouton, 1970, pp. 22-23, with a different cut in the composition of the bookseller’s address but identical to the one described and reproduced by Tchémerzine, t. IV, pp. 172-173).

This version of the text is almost entirely different from the definitive version of 1726.

The modifications made by Lesage on Le Diable boiteux in 1726 are so important that the anterior editions to this date are considered to be of a distinct text from the one published after 1726.

“What abounds in Lesage’s work is his taste for portraits, more physical than moral, that he contemplates and caresses with love in all their details. But while La Bruyère limits himself to a few sober lines, and with an essentially moralizing intention, in the latter, on the contrary, dominates a very different interest: the love of the picturesque, the purely artistic love of reality contemplated in its most colorful and turbulent aspects; this tendency to observe the world of those similar to us can be linked to a long tradition of the Gallic spirit : first expressed in the fabliaux and in Froissart’s “Chroniques”, it later found, in the work of Balzac, its culmination and crowning. It is this particular spirit that gives the “Diable boiteux” its meaning and value.” (Dictionnaire des Œuvres)

Le Petit mentions a copy from the library of the comte de Sauvage and Guy Pellion (1882) : a superb red morocco by Cuzin, 595 fr.

A beautiful copy of this rare first edition, in an attractive binding by Cuzin in red morocco.