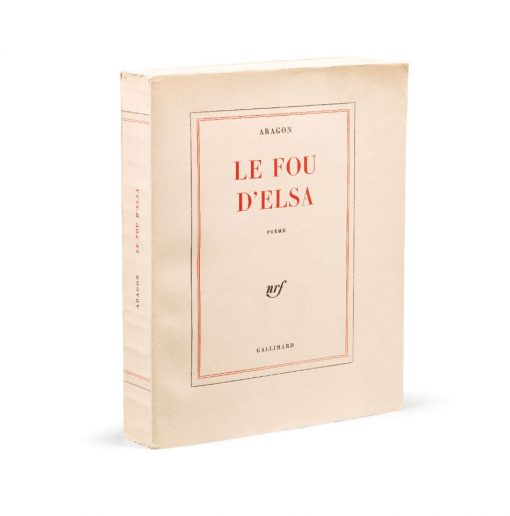 First edition, one of 35 leading copies on Dutch wove paper.

In its wrappers, uncut, as issued.

One of 35 leading copies, on Dutch wove paper.

« When, in 1997, we celebrated the hundredth anniversary of Aragon’s birth and we had to celebrate the 20th century’s most multi-faceted author, the phrase that most often came up to describe him was the title of his poem from 1963, Le Fou d’Elsa. The work’s breadth and magnitude, cultural profusion, literary hybridism, all-around density and, let’s not be afraid to say it, impactful « political » discourse make it one of Aragon’s most characteristic. Le Fou d’Elsa holds a very special place in Aragon’s life’s work but also in the history of French poetry. The breadth and ambitious range of one of the five monstrous poems written by Aragon starting in 1955 link him to the great romantic sagas of which he would be the last avatar. » (Hervé Bismuth)

« Le Fou d’Elsa comes from the heart. The archetypal couple that Aragon and Elsa form opens this great poem to the triple celebration of love, poetry and human unity. Much has contributed to its birth : childhood memories… a song… the abbott Brémond’s famous anthology of Maurice Barrès… Chateaubriand in love with Nathalie, his journey from Paris to Jerusalem and his short story, Les Aventures du dernier Abencérage, where the last descendant of the illustrious Banou Siradj, or Ibn Sraj, lineage exterminated at l’Alhambra comes back to the earth of his ancestors and falls in love with the noble Christian Blanca…

Le Fou d’Elsa, this testament we inherited too early, is a poem on fraternity, on ethnic diversity. Here, once again, Aragon speaks out against war, against its flock of violence, against the pogroms and the raids it generates, against the lies and the manipulations that accompany it. » (Pierre Juquin)

« This book, which, in its depths, like a dried flower, contains a “rememory” of the most painful before » (Aragon) is a lyrical meditation on time, or on the different times that man experiences. It is the chant of a betrayed and sold nation. It is also the pathetic drama of a man, a king, of whom the winning countries have given a sad image, the Boabdil who would have liked to save Granada but doesn’t know how. This lyrical, historical and even psychological poem is a philosophical aggregate.”

A beautiful copy, one of the 30 leading copies on Dutch wove paper of this literary first edition, uncut, in wrappers, as issued.