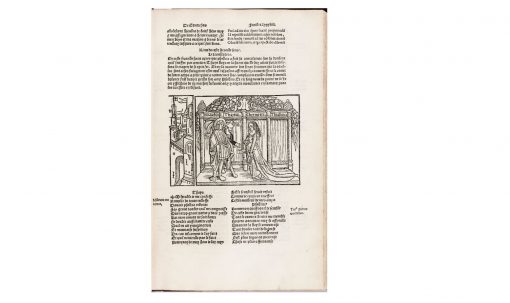 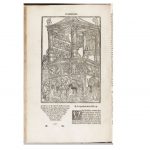 The most densely illustrated edition of the Renaissance,
decorated with 307 remarkable woodcuts.

From the library of Charles Butler of Warren Wood Hatfield.

A superb gothic edition of the great Terence in French.

A precious French literary edition, printed on two columns, presenting the Latin text in roman characters, the translation into French in verse is due to the talent of Octavien de Saint Gelais, and the text in prose, in slating round-hand, translated at the king of France’s request, to Guillaume Rippe.

This is a very sought-after edition for its iconography, of great craftsmanship and importance, which is made up of 307 woodcuts attributed to Jehan de Vingle.

It is the most densely illustrated Terence of the Renaissance.

Book historians have always unanimously considered these illustrations as the masterpiece of a lifetime, a great work of expression, of finesse:

A Firmin-Didot (Essai, 226) who attributed the drawings to Perreal ; Natalis Rondot (Les graveurs sur bois à Lyon, p. 37) ; Claudin (IV, pp. 67 à 77) ; Cat. Fairfax Murray (II, p. 77) ; Courboin (Hist. illustrée de la gravure en France, 33-36). Kristeller and Friedlander have noted the influence on this illustration of an artist from de Lubbock to whom we owe the Dodes Dantz, 1489, and who later made a Bible. Hind, for his part (History of woodcut, II, p. 609), discovered the stylistic identity with Ehrard Reuwich and the figures of the Breydenbach of Mainz, 1486.

Claudin in his Histoire de l’Imprimerie française, describes it at length (IV, pp. 67-77).

“This Terence offers, to a rare degree, says M. Rondot, the qualities of a work of art. A large plate on a full page curiously represents a theater at the end of the 15th century, with the loggia for the elite, that is the consuls or aldermen. The different social classes are sitting at the top, according to their rank, or are mixed in with the popular crowd. The orchestra is represented by a flute player and in the basement of the theater are the “fornices”, where the love scenes play out: it is from this Latin word that derives the term “to fornicate””.

The iconography is of primordial importance for the study of Renaissance theater.

In a notice to the reader, Bade explains that Terence’s theater was represented this way so as to better explain the text. What gives these compositions their charm, says M. Ambroise Firmin-Didot, in his Essai sur l’histoire de la gravure sur bois, and what was really appreciated by the artists, is life, authentic, simple yet spiritual in its naïveté, and also the expression of the figures and the natural pose of each character.

“This work is a masterpiece”, says M. Rondot. “The artist responsible for the drawings is unknown but has proved himself intelligent and handled his pencil with intelligence and skill. The scenic effects were finely observed; the characters move freely and on their faces are revealed the expressions required by the parts they play. The drawing is simple and large. The diversity of shapes creates surprises. We are in the presence of an ingenious technique. The artists have showed rare skill and powerful originality.”

This beautiful gothic edition, decorated with a Renaissance title with four-paneled portals, accentuates the reader’s pleasure through the multiplication of woodcuts, of which they were 159 in the first but are now 307, all very well adapted to the text.

Two of the etchings are present in the first issue.

“The amount of repetition makes this appear a much more lavishly illustrated edition than the Lyons volume. […] The cuts are unusual in showing the plays in full production, with the actors in medieval costume on a projecting platform […] The significance of these illustrations in theatrical history is evident.” (Harvard, French Books, II, N°510, pp.623-625)

A precious copy, with wide margins, of one of the most pleasantly illustrated books of the French Renaissance, in an elegant brown morocco decorated binding from the 19th century.

Provenance : the library of Charles Butler of Warren Wood Hatfield, with ex-libris.

One of the prominent as well as popular figures in the literary and art, as well as social circles of the County of Hertford, is Mr. Charles Butler, of Warren Wood, Hatfield. Born at Finchley in 1821, Mr. Butler was educated privately in England and subsequently on the Continent. Attached to reading he has studied literature: ancient and modern. With frequent visits to the Continent, he has increased his love of art, and this enthusiasm the tide of advancing years has not diminished. Mr. Butler is a Justice of the Peace and a Deputy Lieutenant of Hertfordshire. Politically Mr. Butler is a Liberal-Unionist and has always been a Free Trader and enemy of Protection in any form.