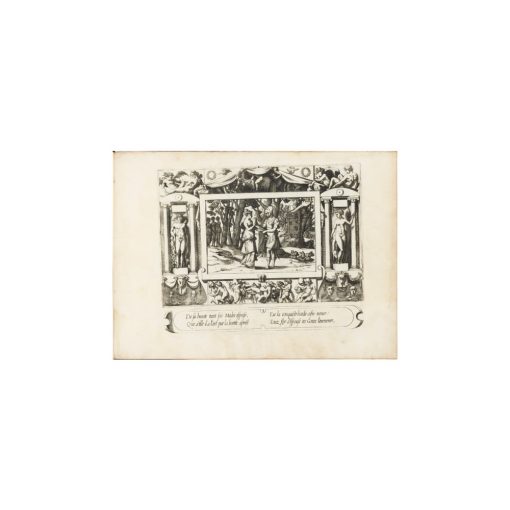 A precious series, extremely rare.
One of the highlights of the Ecole de Fontainebleau.

One of the most precious and rare series from the school of Fontainebleau, copper-engraved by René Boyvin and based on Léonard Thiry’s drawings, one of the first painters called to Fontainebleau by François Ier, who collaborated with de Rosso and Primaticcio for the decoration of the palace.

The book takes its title from an order placed by Jean de Mauregard who, to distract Charles IX, had asked Gohory for the mythological story of the conquest of the Golden Fleece.

In 26 drawings of large format (230 x 160 mm), Léonard Thiry excels in translating the multiple episodes of the legend of Jason. They are inserted in magnificent and very elaborate frames, full of depth and imaginative verve, which places them in the grand tradition of the école de Fontainebleau.

“These etchings were supposed to be used as templates for the royal tapestries.” (J. Gohory)

The last plate bears the signatures of Thiry and Boyvin, “one of the most influential figures in the early engraving in France”. (Mortimer)

“Each scene of the “conquest” is surrounded by a rich frame “displaying a fantastic assortment of figures, putti, grotesques, birds, animals, and cartouches containing small scenes. It is this wealth of invention in the borders, sometimes eclipsing the scenes themselves, that makes this a major work in the Fontainebleau tradition.” (Harvard. French books, 519)

The very powerful etchings are by René Boyvin.

“One of the most considerable and experienced engravers, in the great 16th century French tradition; he was also good at drawing and did etchings.” (Robert Dumesnil, viii, 13 et 55)

The series of the “Toison d’or” is “some of Boyvin’s best work”. It is here in its definitive state, with numbers.

Robert Dumesnil describes 3 states, the first being, in truth, a state before the numbers and before the quatrains (engraved separately). The normal state (R-D : 2e) is this definitive one, with the number on top of each plate. A third later state doesn’t include the numbers.

6 plates have a smaller margin and come from another copy but all of the 26 plates present the same watermark described by Needham (Twelve centuries of Bookbinding. P. 246).

This series is preceded by a preface in French by Jacques Gohory in which Boyvin explains that these etchings were supposed to be used as templates for the royal tapestries.

The text takes the form of quatrains inserted in a cartouche under each engraving.

“After the Italian campaign, François Ier entirely dedicated himself to the project of expanding the industry, trade and culture. The parties organized by the king, which were more elegant than sumptuous, put into display the most brilliant aspects of chivalry. His almost universal curiosity motivated him into buying precious paintings and offering them as models to French artists. He visited in their workshops Primaticcio, Leonardo da Vinci, and sought to emulate the French artists. He undertook the Louvre and built the castles of Fontainebleau, Chambord and Madrid, surrounding himself with the greatest painters and sculptors of the time.”

The painter Leonard Thiry was thus called by François Ier to exercise his talents at Fontainebleau where he worked after 1535 in close collaboration with Rosso and Primaticcio.

He had a predilection for historical subjects, landscapes and genre scenes.

He took part in the decoration of the François Ier gallery and then, from 1537 to 1550, of the Porte Dorée.

“The expenses agreed to, the recruiting of the artists, the inventive effort, the perfection of the ornaments and the originality of the final results have made the François Ier gallery in Fontainebleau an essential event in the history of French art.

The decorative repertoire made up of garlands, putti, cascades of fruits, is an astounding synthesis of Italian motifs adapted to French taste. The treatment and the gaiety of Italian mannerism adapted to France have made it an original creation which defined, for France, the school of Fontainebleau and high Renaissance art.” (André Chastel. L’Art français II. 163-164)

Extremely rare copy of this magnificent series from the school of Fontainebleau, unwashed, and very beautifully printed.

It comes from the library of Louis Denis Secousse (1691-1754), with his signature on the title.

A lawyer in the Parlement and a renowned amateur and savant, member of the Académie des Inscriptions, he had gathered an important collection which was sold after his death in 1755.

This copy then belonged to Maurice Fenaille (1855-1937), one of the great art lovers and patrons of the first half of the 20th century. His collections included, among others, etchings and tapestries from the 16th century.