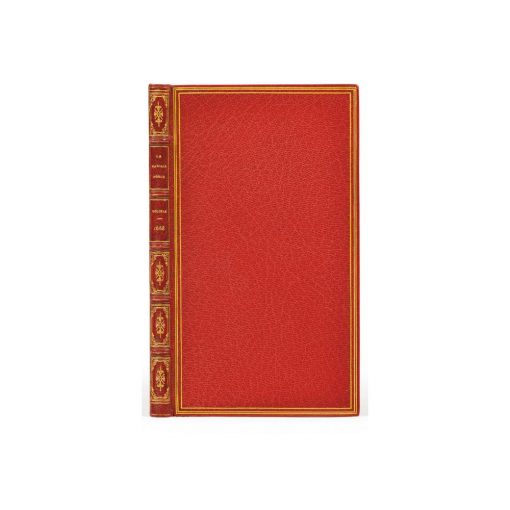 First edition of Molière’s Mariage forcé,
which includes scenes that are “among the funniest in his repertoire”.

Louis XIV danced in it in an Egyptian costume.

First edition of this comedy-ballet by Molière in one act and in prose, performed for the first time on January 29th 1664 in the apartments of the queen mother in the Louvre.

Our comical genius freely draws from Rabelais’ livre and Molière himself plays the part of Sganarelle, a ridiculous man terribly in love and very worried about his wife’s coquettishness.

For the first performance, Louis XIV himself danced the Egyptian ballet that accompanied the play.

Le Mariage forcé is Molière’s first great musical adventure and Lully’s first theatrical one, in a time where the court ballet satisfied itself with vague entries and exits.

It foreshadows what will later become he opera. The comical aspects of this play are furthermore reinforced by a very laid-back atmosphere between the characters played by the king, the aristocrats, the dancers and the comedians.

The play, without the ballet, was taken up again in 1668, and simultaneously re-printed.

“In its reviewed form, Le Mariage forcé will be performed 25 times by Molière, up until his death, and more than a thousand times by the Comédie-Française since its foundation in 1680. Le Mariage forcé is the play by Molière where Rabelais’ influence is the strongest.” (Dictionnaire des œuvres littéraires de langue française)

The two scenes where Molière sets up Rondibilis and Marphurius are among the funniest in his repertoire and they constitute a satire against the university of Paris.

“Like always with Molière, this comical source [Le Mariage forcé] gave him the opportunity to render acceptable the most audacious ideas and the bawdiest repartee by adapting them to the taste of his audience.” (Guibert)

“Le Mariage forcé is an important play, more so than is usually thought.” (Lefranc)

Lefranc, Lafenestre and Donnay considered the Mariage forcé to have an autobiographical aspect: “Molière continues to mock in this comedy the age difference in marriage. Some surmised that in Dorimène’s emancipated attitude laid the portrayal, voluntarily exaggerated, of Mlle Molière, whose coquettishness was starting to worry her hard-working, overwhelmed, sick and irritable husband.”

“Out of his painful preoccupations, his moral and physical sufferings, Molière makes farcical plays.”