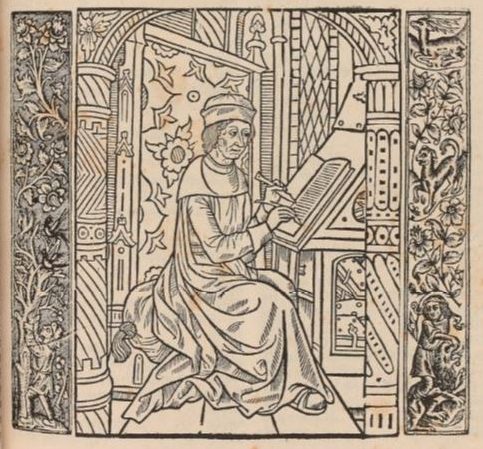 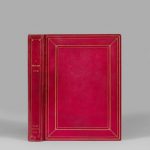 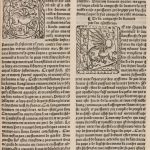 From the library of Thomas Powell with ex-libris.

2 folio [273 x 202 mm] volumes bound in one of : (2) ll., CXXXVI ll., (3) ll. and CCXLVI (misnumbered CCXLIII), gothic font, 2 columns of 47 lines. Title in red and black. In the first volume, 5 engravings plus title ; in the second volume, 4 engravings including title. Gilt letters. Some of the woodcuts can be found in other books. Red morocco, gilt fillets around the covers, finely decorated flat spine, gilt fillets on leading edges, inner gilt roll-stamp, gilt edges. Parisian binding signed by Koehler, circa 1835.

First illustrated edition of the novel La Toison d’Or and third general edition after the first from 1516.

Guillaume Fillastre, born around 1400, was a gifted scholar with great intellectual curiosity, a lover and discoverer of Latin and Italian texts (Cicero, Poggio Bracciolini, etc.), and well-known for his activity as a copyist and his love of women. Guillaume is legitimized sixty years later, in 1460, by Louis XI. At an early age, he joined the Benedictines in Chalons-sur-Marne and was prior of Sermaise and of Saint-Thierry in Reims. In 1436, in Louvain, he obtained the title of Doctor. Philippe le Bon gave him two missions, one in Ferrara and one at the Basle council, and rewarded him by giving him the bishopric of Verdun in 1437.

He is the author of the treaty on the Toison d’or, which he started in 1468 on the duke Charles’ request. The Order of the Golden Fleece had been created by the previous duke in 1430 in honor of his marriage to Isabelle of Portugal and had lead to several other works, by Jean Germain and Raoul Lefèvre for example. Guillaume Fillastre makes an effort to completely Christianize the main character, Jason.

The story of the Golden Fleece is based on Ovid’s version but Fillastre adds numerous events taken from the Bible and Ancient Greek history, and numerous comments and quotes from Petrarch and the Fathers of the Church.

The analyses of the essential virtues highlighted by Fillastre allow him to give a broad historical vision of the achievements of the main sovereigns from Ancient Greece and up to Charles le Téméraire.

The author thus writes an impressive chronicle of French history, also giving an analysis of what the “good government of the prince” is, a study on justice and usury and the merchants’ monopoly.

Dedicated to Charles le Téméraire, the book was however first published in Paris in 1516 and 1517.

Decorated with a first title in red and black inserted in a large frame with gantry, with the coat of arms of France and bearing the seal of Jean Petit, this beautiful edition includes 9 lovely woodcuts of different formats.

The most renowned and spectacular of the engravings is a beautiful image representing Jason in arms (190 x 145 mm) fighting in Colchis the famous monster protecting the fleece. In the background, one of the Argonauts takes the fleece. This image is also found in the first book.

Another engraving in large format (137 x 135 mm) represents the author writing his book.

It is repeated in the second title and volume, inside differently historiated borders, and was inspired by the illustrations of a book of hours.

The other engravings (≈ 125 X 78 mm) show episodes taken from the Bible or the history of France, like a battle during the reign of Dagobert.

The iconographical interest of this edition lies also in the multitude of historiated initials, often several on the same page, that decorate the text throughout.

Some, very large (58 x 50 mm), show imaginary beasts and dragons, in perfect harmony with the text.

A very beautiful copy of this sought-after gothic edition, in an elegant binding by Koehler from around the year 1835.

From the library of Thomas Powell with ex-libris.