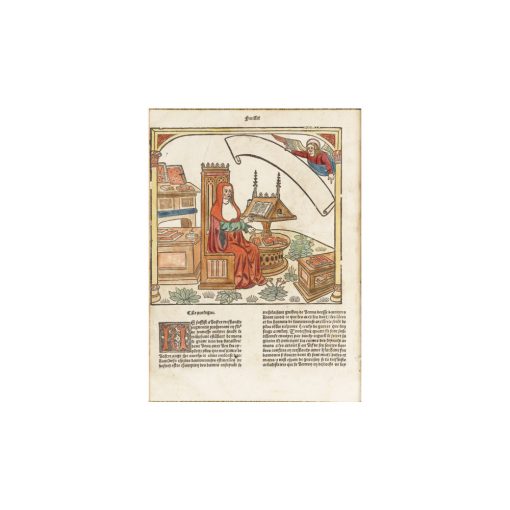 it is the epitome of the medieval novel”

Very rare and precious gothic edition of the Roman de la Rose.
It is decorated with 28 woodcuts in the text, including a large one on the verso of the title.

Printed in a beautiful gothic font, on two columns of 51 lines each, this edition contains numerous decorated and historiated initials and ends with the large mark of Michel Le noir.

The title, on 6 lines, in red and black, bears a large and very spectacular xylographic L initial (70 x 42 mm) from the Vérard collection.

“The L is a decorated “penman’s” letter, with face on left and a crane’s head, downwards, swallowing snake, on right. Either a copy or the original of a letter in Verard’s “Pélerinage de l’homme”, 1511”.”

The very attractive illustration is made up of 28 nice figures engraved on wood and very well-adapted to the text.

On the verso of the title there is a large woodcut (150 x 160 mm) representing the author among his books.

The other woodcuts, spread out throughout the text, harmoniously illustrate this capital book of medieval literature, where Guillaume de Lorris seems to have wanted to create a sort of overview of courtly love.

Very close to the novel, the vignettes and woodcuts create evocative and lively tableaux of the mores of the time and of courtly love: the lover in bed, a loving stroll, a serenade at dawn, knights, a woman in the bath, a rendezvous between two lovers…

This very rare edition is the last of the great editions of the Roman de la rose mentioned by bibliographers like Tchemerzine or Bourdillon.

It was missing in the Rothschild, Fairfax Murray, De Backer, Brunschwig and Barbier collections.

Of considerable breadth, depth and influence, the Roman de la Rose is still the most renowned work from the poetic Middle-Ages and the only one whose memory remained vivid during the Renaissance.

“The Roman de la Rose, a poem in octosyllabic verse, was undertaken by Guillaume de Lorris around 1230. It was continued by Jean de Meung around 1270.

Guillaume de Lorris invented a new narrative form, adapting the allegoric process inherited from the Latin poets to the themes of courtly lyricism; he is one of the first to employ the “autobiographical dream”, and Jehan de Meung will follow in thse footsteps: the novel can be seen as the narrative of a long dream.

Read, copied, commented on, admired throughout the centuries, it is the epitome of the medieval novel.” (C. Marchello-Nizia, 18)