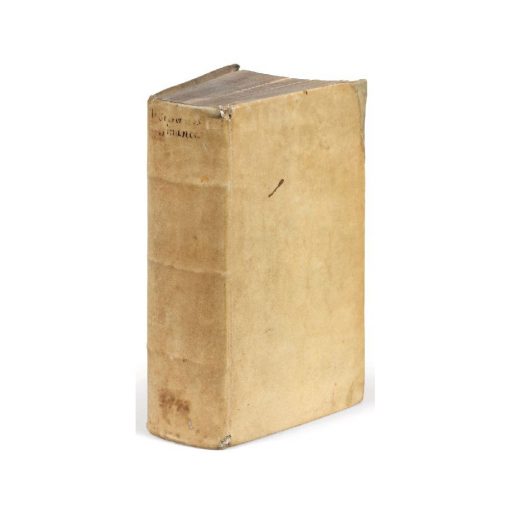 “A statistical study of the miseries of France” (Hoefer)
and the losses caused by the wars of religion
under the reign of Henri III.

A beautiful copy, wide-margined,
preserved in its contemporary vellum.

First collective edition of this famous book of economics considered to be the first statistical essay.

The author gives an overview of the miseries of France and the losses caused by the wars of religion under the reigns of Henri II and up to Henri III.

Considered by bibliophiles to be the best edition, the third part is a first edition.

This edition is much more complete than the first one published the same year in 16mo format under the title : “Les secrets des thrésors de la a France descouvert et départi en deux livres”.

“The first edition is not as complete.” (Brunet)

“Incomes and public spending from 1550 to 1580. Global evaluation of the population under Henri III… we can consider this book to be the first statistical essay, even though its evaluations are somewhat arbitrary.” (INED)

“At the end of the 16th century, in France, the concern over knowing the exact population and wealth of the monarchy rose.

In Le Secret des finances de France, Froumenteau expresses, even more so than Bodin, an interest in statistical information and publicity, a rare feat for the time. He tries to evaluate the French population by publishing the number of parishes, houses and families. He evaluates the number of victims during the wars of religion. Social and economical aspects are not neglected. This book contains an abundance of number on the properties of the clergy, the number of priests and of the “parasites” they entertain or of the nobles that can bear arms.” (J. Y. Grenier, Histoire de la pensée politique économique)

Froumenteau’s book is “an overview of the Ancien Régime and gives a fairly accurate idea of the end of the 16th century : a confusing blend of texts, grants, royalties, alienation, loans and forfeits that gave the Treasure department the means to support the royalty.

After come some reflections on overspending and the fact that the coffers of the State are “empty and spent”, and the reproduction of the reflections that Froumenteau’s work inspired the Assembly, who had requested such a study.”

Froumenteau is a pseudonym which historians believe could be one of two men : Nicolas Barnaud, a Calvinist polemist, and Jean Frotté, secretary of finances of Marguerite de Navarre, and later of the king up until 1560, affiliated to Protestantism, author of the “Miroir des Français” in 1581 ; his experience of financial affairs made him perfectly apt to write the “Secret des finances”.

“In the “Secret des finances”, printed in 1581 under the name of Froumenteau, we find an enumeration, for each province or diocese, of all the different taxes that were raised in a time-frame of 32 years, between the coronation of Henri II up until 1580, under Henri III. The author exposes the different complaints that the three orders addressed to the government of Henri III, and gives an overview of the losses that the troubles caused by the civil wars that despaired France under the last Valois provoked.

The elements in the Secret des finances seem to come from the books that the three orders presented to king Henri III, during the états-généraux that met in Blois in 1576.

Upon study, it would seem that, since the end of the reign of Louis XII and up to 1580, the taxes had more than quintupled.

A Parliamentary court that, under Louis XII was made up of a president and twelve advisors now employed fifty men under Henri III.”

“The value of the “Secret” remains important to economical history. The author seems to be someone who knows what he is talking about.” (Hauser)

A beautiful copy, wide-margined, preserved in its contemporary vellum.