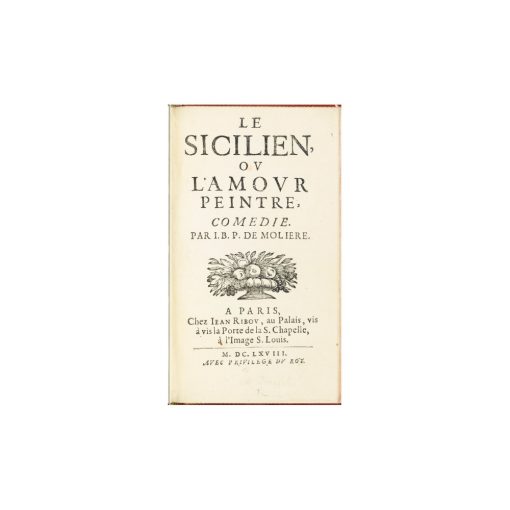 Louis XIV played the part of a Moor.

A beautiful copy preserved in its morocco binding
with doublures by Chambolle-Duru.

First edition of this comedy.

The first performance was given in the castle of Saint-Germain-en-Laye on 14 February 1667.

“The performance met with great success and Le Sicilien immediately took its place among Molière’s finest achievements. The rhythmic prose he used in this circumstance was perfectly adapted to the music and Robinet did not hesitate to consider this new theatrical expression as a masterpiece. On 10 June 1667 took place the first public representation, at the Théâtre du Palais Royal, in Paris, and the spectators were very pleased with the performance. Le Sicilien was performed 17 times during the months of June and July 1667, and then twice again before Molière’s death. The play had mostly conquered an intellectual audience because of its elegant lightness and because of the characters’ charms.” (Guibert)

The privilege is dated on the last day of October 1667 and the colophon is dated November 9th of the same year.

“In the privilege, this comedy is presented as “beautiful and very pleasant”, which is a quality all the more remarkable that the king’s privileges never contain any literary appreciations.” (P.Lacroix)

In the entertainments offered to the king, there wasn’t anything inspired by the Orient.

Molière was very imaginative in creating the characters of the Moors and the Turks, of which little was known at the time.

The king declared himself to be quite satisfied and as he quite enjoyed participating in the entertainments he was offered, he played a role in this fine and spiritual comedy and took part in the final masquerade of the play in the costume of a noble Moor.

“There are in Le Sicilien numerous delicate and savory passages that in some way foreshadow Marivaux and Musset.” (Dictionnaire des Œuvres)

A beautiful copy of this first edition by Molière, finely bound in red morocco with light-brown morocco doublures by Chambolle-Duru.