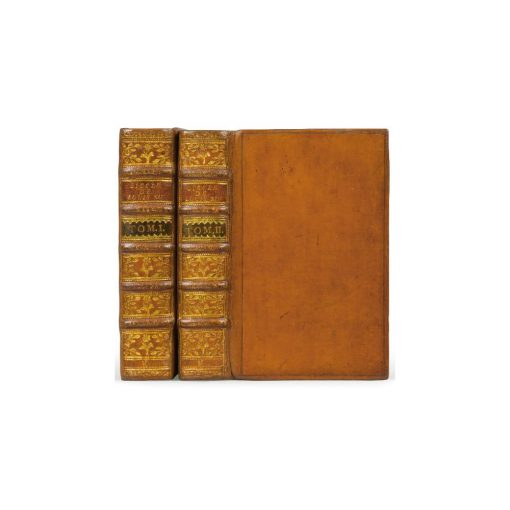 First editions “very rare and sought-after”
of the Siècle de Louis XIV,
“the most important of Voltaire’s historical text

and one of his most beautiful works”.

First edition “very rare and sought-after” of one of Voltaire’s major texts, “a rare find in contemporary binding”. (Bengesco)

The 1751 first edition is particular in two ways: there isn’t one capital letter in the whole text except at the beginning of each paragraph. It is the first entirely printed in Voltaire’s spelling.” (Bengesco)

“Le siècle de Louis XIV is Voltaire’s most important historical text and one of his most beautiful works. Voltaire equals the great 17th century writers whose superiority he celebrates here.” (Dictionnaire des œuvres)

“Voltaire reveals himself to be one of our first historians.” (R. Pomeau, En Français dans le texte)

Voltaire’s intention was to demonstrate the superiority of the 17th century, “so fertile in great minds”, and of Louis XIV over the government of Louis XV, who had sent the young author to the Bastille and then in exile.

Voltaire was thirty-eight years old when he thought about writing the history of Louis XIV. He began writing this historical text in Cirey, at the request of the marquise du Châtelet.

This gallant gesture was in fact only an answer to the author’s deepest designs: to explain the world in the light of eternal reason. It is before all else an exposé of the progress of the human spirit.

On 17 June 1738, Frédéric II wrote to Voltaire : ‘”I urgently pray you to continue Le siècle de Louis XIV. Never has Europe seen such a story; and I can assure you no one has even pondered the possibility of a book as perfect as the one you have started.”

Voltaire had been in touch with a great number of direct witnesses and great individuals from Louis XIV’s reign, which made the intrigues and anecdotes revealed in the book for the first time so enticing.

“First modern historian, Voltaire here delivers the first great historical text where the main character is the nation and whose main focus is on the ways of life, and not on battles. His assured judgement and his attachment to the scale of values are admirable.

There was courage and boldness in undertaking, in 1732, such an enterprise. Louis XIV’s memory was hated, the people only remembered the miseries from the end of his reign, the austerity of the last years.

What is remarkable is that he tried to anticipate History’s judgement and that he, in the end, admirably succeeded; every chapter is a masterpiece of clairvoyance, speed, intelligence, conciseness.” (Dictionnaire des Œuvres)

A precious copy preserved in its contemporary binding.

“The first edition in contemporary binding is very hard to find.” (Bengesco)