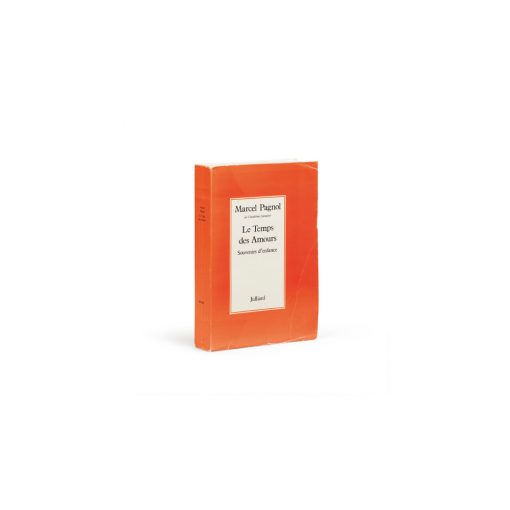 only printed at 125 copies.

A precious copy from the leading copies,
one of 25 on Dutch paper,
preserved in its contemporary wrappers, as issued.

First edition of this autobiographical novel by Marcel Pagnol, only printed at 125 copies.

A precious copy from the leading copies, one of 25 on Dutch Van Gelder, first paper.

An autobiographical novel by Marcel Pagnol, Le Temps des Amours, is the fourth and last book from the series of the Souvenirs d’enfance, which comprised of La Gloire de mon père (1957), the Château de ma mère (1959) and the Temps des secrets (1960).

Le Temps des Amours is made up of 10 chapters found in the author’s files after his death and reunited as such by the editor Bernard de Fallois. A great number of texts had already acquired their definitive form.

Most of the novel relates episodes of his life as a boarder at the Lycée Thiers in Marseille where he started in 1905, and a blend of adventures from his holidays in his beloved hills.

In the Souvenirs d’enfance stands out his love for his land of Provence, where he associates himself to the transfigurations of memory. He speaks of the real persons he knew but whom, as time marched on, have become characters. And in his account of real events, the memorialist takes as much pleasure as the novelist who lets his imagination run wild. Pagnol said “if I had been a painter, I would only have painted portraits”. The ones he drew of the people of his childhood remain marvelously alive.

In a time where regional cultures try to renew with their traditions and dig up their roots, it is not a bad idea to recognize Marcel Pagnol’s role as a sort of pioneer.” (Guy Le Clec’h)

“Nothing better than Le Temps des Amours better shows that Pagnol’s genius was a realistic genius. The things, the people, the events he like to describe are always taken from life.” (Bernard de Fallois)

A superb copy, preserved in its wrappers, uncut, as published, as new.

Pagnol’s first editions on large paper and preserved in their contemporary wrappers are very sought-after.