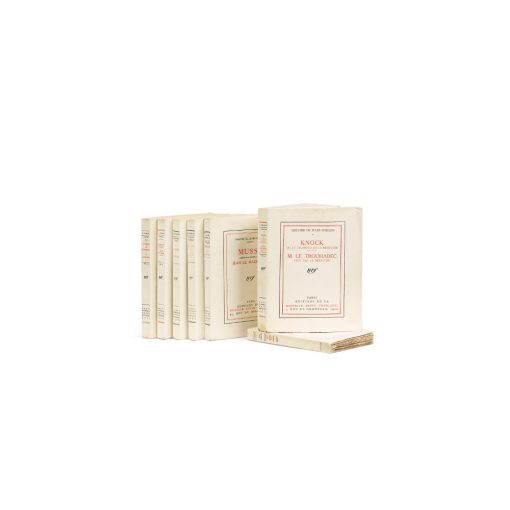 A precious copy, one of the rare printed on large paper, a leading copy, and one of the 100 put aside for the
bibliophiles of the Nouvelle Revue Française,
preserved in its publisher’s wrappers, as issued.

One of the copies printed on large paper, belonging to the leading copies.

One of 108 deluxe copies on Lafuma-Navarre pur fil laid paper and one of 100 put aside for the bibliophiles of the Nouvelle revue Française, for volume I.

One of 109 deluxe 4to copies on Lafuma-Navarre pur fil laid paper and one of 100 put aside for the bibliophiles of the Nouvelle revue Française, for volumes II à VI.

One of 50 deluxe copies on Lafuma-Navarre pur fil laid paper and one of 30 numbered, for volume VII.

“A three-act play, this comedy surpasses the farce; the attack is so dark and so virulent that it leads to an anxiety about the modern world. But in the beginning, it is most inoffensive. The docteur Parpalaid sells his worthless practice to Knock. Thanks to a free consult, Knock manages to attract several clients, immediately convinced of their illness. With mastery, Knock manages to put to bed the entire town and his fame spreads throughout the country.

The smiles and laughter of the beginning of the play rapidly disappear and are replaced by a discomfort as the mechanism of human gullibility is unveiled and exploited by an able charlatan. This global mystification in the name of science is quite frightening. None of those who were duped feel any need to blame or revolt; it is a total submission of the naïve by the most industrious.” (Dictionnaire des Œuvres)

In Knock, Jules Romains takes up the Molieresque tradition. He places himself in the continuation of the Médecin malgré lui and the Malade imaginaire.

“Born on August 26th 1885 in Saint-Julien Chapteuil, Louis Farigoule, who will later take up the pen name Jules Romains, claims himself a poet at a young age with L’âme des hommes.

La Vie unanime inaugurates a vast program of poems, novels and plays, making Jules Romains one of the most well-rounded authors of his time. Jules Romains writes Knock in three weeks.

Jouvet had been able to see the manuscript and he convinces Jules Romains to let him put on the play.

We all know the rest: an immense success at the Comédie des Champs-Elysées on the evening of December 14th 1923, 1500 representations by Jouvet himself, three cinematographic adaptations. Knock has traveled around the world and the sales largely surpassed the millions…

An attack on doctors and patients alike, a cynical interrogation on the exploitation of the physiological fear of death, Knock has become, in sixty years, a model of satirical comedy denouncing imposture in all its forms, and earned Jules Romains a place of choice in the Molieresque tradition.” (Olivier, Rony, En français dans le texte, n°350)

A precious copy, one of the few printed on large paper, belonging to the leading copies and one of the copies put aside for the bibliophiles of the Nouvelle Revue Française, preserved in its publisher’s wrappers, as issued.

There are no reviews yet.

Be the first to review “Le Théâtre” Cancel reply