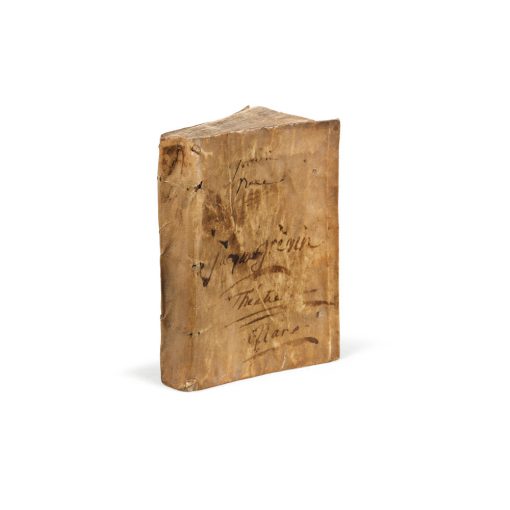 First edition of the Théâtre by Grévin,
preserved in its contemporary limp vellum binding.

Limp vellum, handwritten title on upper cover, flat spine, small worm gallery in the first half with some loss of letters. Contemporary binding.

The verso of the title bears a portrait of Grévin at age 23, engraved on wood and attributed to Nicolas Denisot. The 11 ll. following include an elegy of Pierre de Ronsard.

This “rare volume” (Rahir) contains a tragedy titled César, the first tragedy to be composed in alexandrines and the first regular tragedy ever published in France.

“More so than Jodelle or La Péruse, Jacques Grévin (1538-1570) can be considered as one of the founding fathers of modern French theater : like Garnier, he not only got his plays performed but also carefully supervised their editions. Contrary to what the title may suggest, Le Théâtre by Grévin contains numerous poems : they make up, on the one hand, the second part of L’Olimpe, where we notice many imitations of Petrarch, and, on the other hand, the Second Livre de la Gelodacrye, of a more Protestant inspiration, such as the sonnets disdaining all mundane vanities.

But the Théâtre is particularly important because of the three dramatic pieces that Grévin here published for the first time. Grévin had started with a comedy titled La Maubertine. The play was performed at the collège de Beauvais in 1558, but had never been published, even though the author wanted it to be. Shortly before the peace of Cateau-Cambrésis, Henri II requested upon the young man, and it was a considerable honor, a play for the wedding of his daughter Claude with the duke Charles III de Lorraine : it was another comedy, La Trésorière, the story of an adulterous and stupid woman, and performed at the collège de Beauvais, in Paris, on 5 February 1559. Two years later, after he got back from England, he wrote a third comedy, Les Esbahis, performed yet once again at the collège de Beauvais in February 1561. Written in octosyllabic verse, these comedies adopted a downgraded style, as required by the genre. Grévin had tried to render his characters credible by making them talk in a colloquial language, in relation to their social status. For Grévin, adopting the style and manners of the comic authors of Ancient Greece and Rome was a sort of return to the fundamentals. The Italian comedy, recently introduced in France, was a source of inspiration for the Esbahis but also something to mock.

In a more sublime register, the only tragedy by Grévin, César, written between 1558 and 1561, proved a decisive step in the history of French theater : it is the first tragedy written in alexandrines. The play also respected the unity of action, place and time dear to Ancient tragedies. Even though he denied it, the play owed a great deal to the Julius Caesar by Muret, performed in Bordeaux in 1547. But, contrary to his former master, Grévin, while in keeping with propriety, tells of the assassination of the hero through a messenger.” (N. Ducimetière, Mignonne allons voir, n° 106)

“Grévin was the first, if not to compose (Jodelle and La Péruse had done it before), at least to publish tragedies and comedies in our language.”

Notably, the tragedy of César is quite renowned ; according to Haag, “the progress that this play by Grévin made was considerable and one can suppose that, without our unfortunate civil wars, the Mairets, Rotrous and Corneilles would have been born fifty years earlier. As for comedies and tragedies, Grévin is just as great as his predecessors.”

A precious copy, preserved in its contemporary limp vellum, with wide margins (height of 163 mm instead of 161 mm for the Bérès copy).