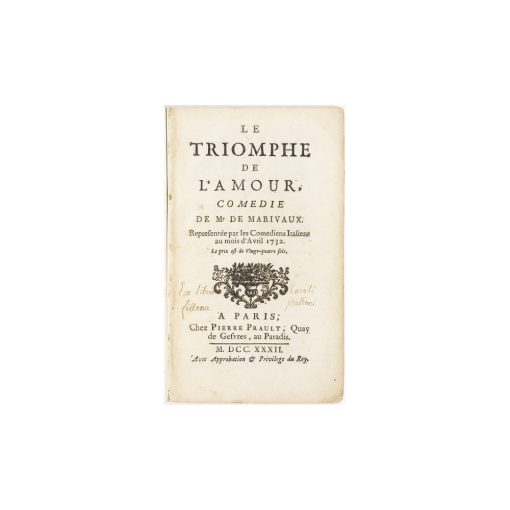 Rare first edition of the Triomphe de l’amour by Marivaux.

An attractive copy,
preserved in its contemporary wrappers, as issued.

Rare first edition of the Triomphe de l’amour by Marivaux, “this “Greek” masterpiece that betrays the strong influence of the Fontenellian model”. (François Moureau)

“Heir to the throne previously usurped by her uncle, Léonide, princess of Sparta, learns one day that Agis, the legitimate heir everyone thought to have disappeared, lives in hiding with the philosopher Hermocrate and his sister, the virtuous Léontine. Without betraying her presence, she manages to see the prince and develops for him a strong inclination. She then decides to reestablish her rights by offering him, through marriage, the possibility of sharing the throne. To reach her objective, and with the help of her maid Corine, she imagines an audacious and ingenious stratagem. First she assures herself, through money, of Arlequin’s silence and of the complicity of Dimas, Hermocrate’s valet and garderner, and then, disguised as a man and under the name of Phocion, she enters the home of the philosopher pretending to be in need of his wise advice. The play offers several roles of remarkable finesse and sensitivity.” (Dictionnaire des Œuvres)

This comedy in three acts broaches the theme of the cruelty of love, which is now always present in Marivaux’s theater.

Marivaux’s plays are like a stroll in the shadowed counter-alleys of the great garden of human nature.

Marivaudian dialogue is, by nature, best defended by talented actors with experience in the “commedia dell’arte”, who are more flexible and spontaneous than French actors would ever be. They allow Marivaux to bring a new, singular and original tone to the theater and a renewed dramaturgy, something everyone was waiting for since Molière.

An attractive copy, preserved in its contemporary wrappers, as issued.

Provenance : ex-libris “Filleau caroli patroni” on the title-page ; handwritten ex-libris on verso of the wrappers.