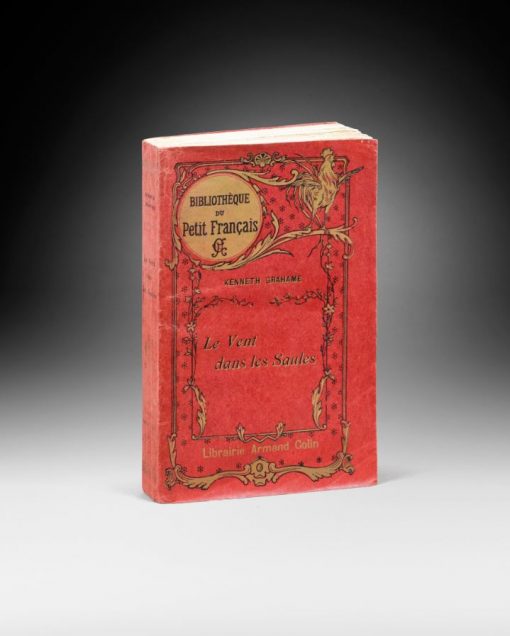 “Probably one of the most cherished books in the British

In 1908, Kenneth Grahame (1859-1932) quits his job as a secretary in the Bank of England and returns to Cookham, Berkshire, where he spent his childhood. He starts writing tales for his son Alistair. The American president Theodore Roosevelt writes him in 1909 “that he has read and re-read the novel and has come to consider the characters to be old friends”.

It’s spring in the countryside and the sun is shining. The good-natured Mole is tired of his spring cleaning and decides to leave his underground home to get some fresh air. He arrives at the river, which he had never seen before. There, he meets Rat, who invites him for a ride in his boat ; they decide to pay a visit to Toad. Toad is rich, jovial, friendly and about to go on a trip. He convinces Rat and Mole to come with him. Mole wants to go see Badger and goes into the Wild Wood but gets lost.

These tales refuse to be morally simplistic and Kenneth Grahame enchants his reader by making him feel the poetical force of the English countryside.

Grahame didn’t live long enough to see the book released with Shepard’s illustrations, but their meeting would be reported by Shepard as follows : “Not sure about his new illustrator of his book, he listened patiently while I told him what I hoped to do. Then he said ‘I love these little people, be kind to them’.

Just that; but sitting forward in his chair, resting upon the arms, his fine handsome head turned aside, looking like some ancient Viking, warming, he told me of the river nearby, of the meadows where mole broke ground that spring morning, of the banks where Rat had his house, of the pool where Otter hid, and of Wild Wood way up on the hill above the river… He would like, he said, to go with me to show me the river bank that he knew so well, ‘…but now I cannot walk so far and you must find your way alone’.”

« Other than the comfort generated by assiduous visits, some books dispense a peace that is their own, like a feeling of immanent softness. Le Vent dans les saules is one of those. Something in the vocabulary, in the rhythm of the sentences is enough to convey the atmosphere that reigned in the landscapes that Grahame knew well and loved… Presenting his novel to the publisher Charles Scribner and Sons, Grahame defined it as a “book for children and therefore written for children or at least for those who maintain their childlike spirit intact. It is a book on life, a book of sun, fresh water, forests, dirt paths, winters by the fire…” Every new read of Le Vent dans les saules enriches my life experience and gives it more sense. There is something in that book that re-enchants the world.” (Alberto Manguel)

“Probably one of the most cherished books in the British collective subconscious of all ages this “waterside tale” has become a great classic of English familial literature. A writer “of” childhood more than “for” children, Kenneth Grahame belongs to a family of authors like Beatrix Potter, A. Milne and Rudyard Kipling, advocates of a subconscious ideology for a return to the pre-industrial age.” (Jacqueline Colombat)

A beautiful copy, preserved in its original publisher’s wrappers, as issued.