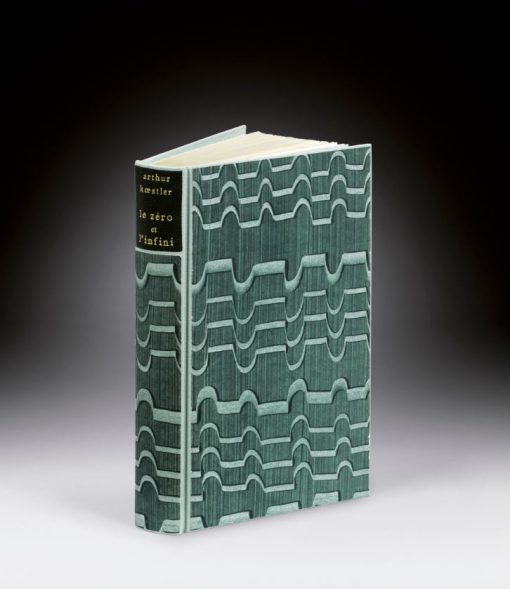 French first edition;
a very beautiful copy, one of 200 printed on large paper,
preserved in its intelligent binding created by Claude Honnelaître.

First French edition of this classic novel on totalitarianism.

One of 200 copies on white Marais wove paper, only issue on large paper.

“Today, M. Koestler offers us a masterpiece: Le Zéro et l’Infini. For him, the idea is to find out if an individual, whatever the circumstances, must sacrifice himself for his community. M. Koestler, who knows what he is talking about, tells us the story of a political trial. He has a long experience of jails ; he knows what an interrogation, a trial, a sentence and even an execution is. He makes us benefit from his experience. This book leaves its mark.” (Henri Jeanson)

The historical scene where the plot of Le Zéro et l’infini plays out, its bloody background, is the Great Terror that, in the second half of the 1930’s, submerged the Soviet Union in a dark wave of mass political assassinations like the country had never seen before. Four years of a systematic purge where the soviet revolution reached its terrifying climax and arrived at the ultimate stage of its criminal logic. A horrible tragedy that marked the end of a process where the 1917 revolution and the edification of socialism lead to a totalitarian bureaucracy and unshared power. For Koestler, it is the strangest regime of terror that humanity has known.

The bindings of Claude Honnelaître and the subtle art of this “seamstress of books”: the modernity of her decorated papers, the precision of the cuts and the never-ending harmony of the colors. Claude Honnelaître (1929-2005) created, using processes of reprography, a singular decorative language in the art of book binding. The use of modest material give her ink and paper case-binding a lightness and sincerity that are in perfect equation with the spirit of the texts.