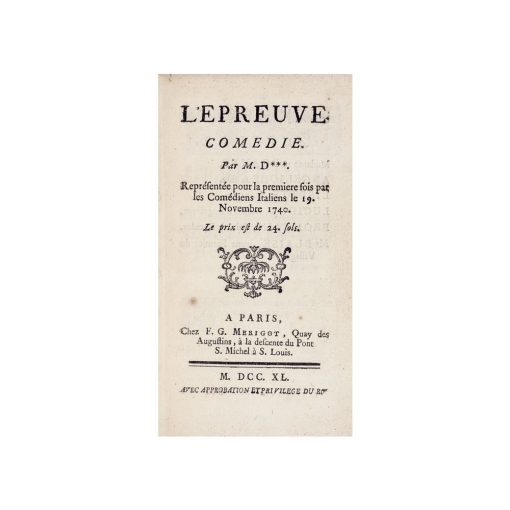 Very rare first edition of the last play
given by Marivaux to the Théâtre-Italien.

A precious copy, complete with the errata leaf
that is almost always missing,
preserved in its red morocco binding
made by Chambolle-Duru.

From the library of Louis Barthou, with ex-libris.

Very rare first edition of the last play given by Marivaux to the Théâtre-Italien.

Our copy contains the errata leaf, at the end, that is almost always missing.

This one-act comedy in prose “had a lot of success and deserved it. There aren’t many that one sees more often and with more pleasure”. (P. M. Duviquet)

Its good fortune has prevailed throughout the centuries: l’Epreuve is still one of the most popular plays performed by this author.

“At the first performance of L’Epreuve, on Saturday November 19th 1740, did Marivaux know that with this one-act comedy he was going to dismiss his Italian actors and even the Théâtre ? All of Marivaux’s dignity shines in l’Epreuve. In appearance, it only seems like a slight variation on a familiar theme of the comedic opera, and of comedy, an opportunity for entertainment.” (Jean Fabre)

The work of Marivaux (1688-1763) testifies to a literary personality among the most remarkable of his century. Marivaux has read the great novelists of the 17th century from Cervantes to Scudéry with passion. In 1720, Marivaux turns to theater and appears on both of the official stages. At the Théâtre Italien he offers a comedy in three acts, L’Amour et la Vérité, and at the Théâtre Français, he gives Annibal.

According to D’Alembert, he was unsatisfied by the way the actors at the Français performed: “The actors must seem to never feel the weight of the words but, at the same time, the spectators must, and they unravel it through a kind of cloud that the author has wrapped around his words. But as much as I have repeated this to the actors, their furious will to show me up has been stronger than my very humble reproaches; and they better liked perpetually misinterpreting me in their acting, because it flattered their ego, than seeming to not hear the finesse of their roles.” That being said, the actors of Luigi Riccoboni’s troupe, whom the Regent had brought from Parma to replace the former troupe whom the Parisians missed, perfectly suited him.

Marivaudian dialogue is, by nature, best defended by talented actors with experience in the “commedia dell’arte”, who are more flexible and spontaneous than French actors would ever be. They allow Marivaux to bring a new, singular and original tone to the theater and a renewed dramaturgy, something everyone was waiting for since Molière.

Marivaux is a moralist and an analyst of the heart but he also observes the society of his time, its classes, languages and even abuses.

A precious copy with wide margins, preserved in its red morocco binding made by Chambolle-Duru.

A very rare first edition: in our research, we were only able to find copies at the Bnf and d’Oxford university (52-page copy ?).