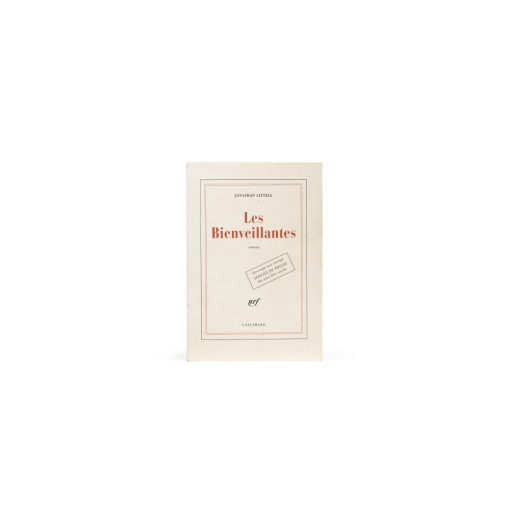 A rare copy of uncorrected proofs, printed in small number on June 6th 2006 and destined for the press,
two and a half months before the first edition went on sale.

A precious copy, preserved in its wrappers,
as issued, and bearing the stamp « Ouvrage non corrigé.
Service de presse » on the cover.

A rare copy of uncorrected proofs, printed in small number on June 6th 2006 and destined for the press, two and a half months before the first edition went on sale.

In September 2006, when Les Bienveillantes, a novel written by a young previously unknown American writer, creates a scandal in the French literary world, the anonymous author of an article on the book writes: “all, or almost all, has been said about les Bienveillantes”. This immense and shocking novel, told by a Nazi persecutor, has drawn the endless interest of literary critics, historians, philosophers and other novelists as well as politicians. Jonathan Littell’s book is still the object of comments, critics and analyses in the most prestigious intellectual reviews as well as in public debates and international symposiums.

Les Bienveillantes is disturbing, deeply disturbing, because the novel asks fundamental and troubling questions about the past and the present. From a literary perspective, these interrogations are linked to the status of the French novel; they also concern the troubling links between fiction and morality and fiction and history.

For Pierre Assouline, Daniel Bougnoux and Georges Nivat, Les Bienveillantes is no more no less than a masterpiece, on the par with the greatest Russian novels of the 19th and 20th centuries. For Georges Nivat, Littell’s novel can be compared to Dostoievsky’s Brothers Karamazov and the Possessed as well as Life and Destiny by Vassili Grossman. Nivat adds that Les Bienveillantes “is not a revolution in writing, it is a revolution of the fictional freight: a nave charged with so much history, night, blood, desires had not been welcomed into our ports in a long time.”

For Daniel Bougnoux, who makes a comparison between Les Bienveillantes and the French masterpiece L’Education sentimentale, the novel by this young American author “will become a classic, it will be taught in school, we will forever interrogate its historical outcome, its moral implications”. (Marc Dambre)

“The success of Jonathan Littell’s novel raises a double debate, literary and historical.

That fiction would tackle such a topic is perfectly legitimate. It does it with its strengths and weaknesses. I feel real sympathy for this novel. I don’t agree with those who accuse it of voyeurism. Voyeurism is a precise concept, it is a perversion. It is a label-weapon used to invalidate the book without further discussion. But that is not what is happening with Les Bienveillantes. It is more a phenomenon of utter stupefaction.

The readers are fascinated because they understand that to better understand the massacres, the atrocities, we have to listen to what the executioners have to say, more so than the victims, innocent by definition. I am not surprised by the success of Les Bienveillantes. It is an attractive novel. The first three hundred pages are factually impeccable. The dialogues are perfectly written.” (Christian Ingrao)

“As a historian, I notice that there was a tremendous effort made on research before the writing began. Then I wonder about what this success means, a success that started even before the novel received the prize of the Académie française and the Goncourt. Is this about the recurring fascination for barbarism? Is this about the long-enduring French passion for the Second World War? Or this book and its success are they revelatory of a change in our memorial register?

To simplify, immediately after the war, it was all about the Resistance; in the 1980’s, we entered the era of the victims. And in the last two or three years, we see, on the one hand, a competition within the victims, with a manipulation done by the bearers of memories in the name of victimization and, on the other hand, a certain saturation of the public. Therefore, we can ask ourselves if the success of this novel, its literary qualities notwithstanding, doesn’t open another memorial register. Are we entering the era of the executioner? Is this a diversification of the genres : we talk of the victim but also of the executioner, of the spectator? Or is this a closing in on another figure, the figure of the executioner?

The stakes are important, but I cannot give a definitive judgement. Be that as it may, I am not convinced that there is much to gain in sanctifying certain events and forbidding other forms of expression on these events, notably the Shoah.” (Denis Peschanski)

A precious copy, preserved in its wrappers, as published and bearing the mention “Ouvrage non corrigé. Service de presse” on the cover.