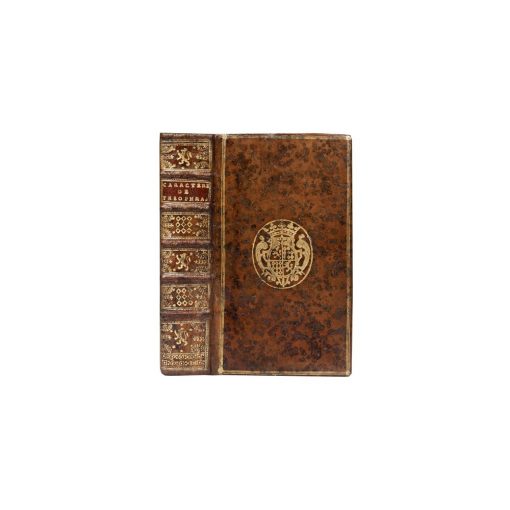 The 8th first edition of the Caractères by La Bruyère,
presenting 46 new characters,
preserved in its contemporary binding
with the arms of Louis-Joseph d’Albert, duke de Luynes.

“First edition, the eighth, containing 1 120 characters of which 46 had not yet been published, such as Cydias, Clitophon, Antagoras, Carro-Carri. The acceptance speech from the Académie française is here published for the first time with the Caractères.

In this edition, La Bruyère tried to give a logical and coherent form to his work ; this idea lead him to modify the order of the Caractères so as to introduce an “insensitive order”. (Tchemerzine)

“With the Caractères, La Bruyère targets common passions and general types, but always taken at the moment of their manifestation and in the context of a particular society. Through his portrayals of manners, we can see the growing domination of money that was starting to put cracks in the frames and traditions of the old society.

But La Bruyère’s concrete and, we could also say, photographic realism, so well served by an agile and sharp style, marks in of itself a transition between the great classics and the 18th century : it leads us closer to Montesquieu and Voltaire than Molière.” (Dictionnaire des Œuvres)

“Les Caractères gained tremendous fame. The author of the Mercure galant, de Visé, tells that he was at court the first day the Characters were published and he witnessed all over small groups “barking with laughter”. Everyone thought they recognized someone they knew. The text, welcomed as a pamphlet, stayed in the intellectual heritage of the human species as a masterpiece of moral observation. In literary history, it is an exceptional destiny that would be sufficient to show the strength and truth with which the author, by portraying the people of his time, portrayed mankind in all of history.” (Ch. Louandre, les Caractères de La Bruyère)

In March 1688, Bussy-Rabutin wrote to the marquis de Thermes about the Characters : “I share your opinion that the destiny of this text, as soon as published, will please the intellectuals but, in the long run, it will please even more..”

A precious copy, with beautiful margins, preserved in its contemporary binding with the arms and armorial pieces of Louis-Joseph d’Albert de Luynes (1672-1758).

“Son of the duke Louis Charles de Luynes, great falconer of France and governor of Picardie, Louis-Joseph d’Albert de Luynes got acquainted in 1703 with the elector of Bavaria who became emperor of Germany under the name de Charles VII. Appointed as an advisor of the imperial state, he became ambassador extraordinaire to the court of France and prince of the holy empire in 1742.” (O. Hermal, pl. 1844)

The first edition of the first issue is sought-after in armorial binding.