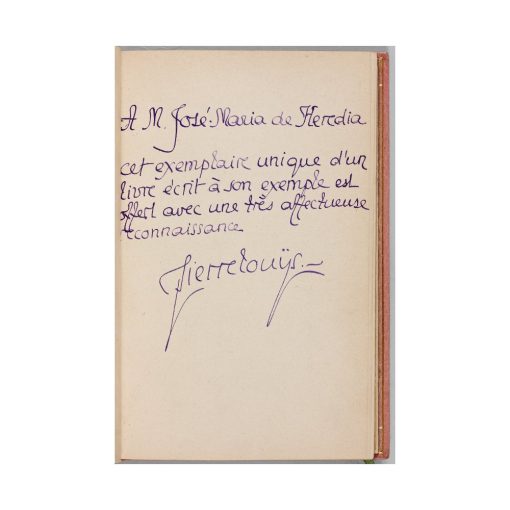 Unique copy especially printed for Heredia,
enriched with an autographed dedication
and 3 corrections in the text by the author’s own hand.

A unique and precious copy of the Chansons de Bilitis, printed especially for Heredia, and enriched with a dedication from the author to the latter.

Partly first edition containing the texts from the first edition, and 17 new pieces in the “Bucoliques en Pamphylie” ; 14 in the “Élégies à Mitylène” ; 21 in the “Épigrammes dans l’île de Chypre” ; so, in total, 52 unpublished pieces. (Talvart, XII, 320)

“The extraordinary Chansons de Bilitis, one of Louÿs’ masterpieces and one of the most beautiful specimen of prose poems ever conceived in our tongue. This collection can be considered one of the happiest moments but also as the peak and conclusion of the Parnassian movement.” (Dictionnaire des Auteurs)

“At first glance, Les Chansons de Bilitis, which are each divided in four distinct paragraphs, seem to be sonnets written in rhythmic prose, where blank verses of 8 or 10 syllables abound. But they are poems in prose. Everything is dependent on the rhythm, and Louÿs’ originality lies in the unity that he gave his texts by building a coherent ensemble presenting Bilitis’ life.” (Goujon, op. cit., p. 143).

Mallarmé claimed them to be “marvelous”: “How you have done so much more than translate! It seems that Ancient Greece, in its pure essence, must return to us through the creative joy of children, contemporary, in whom it will find an innate turn seemingly reserved for it in the future.”

The copy is enriched with handwritten corrections by Pierre Louÿs modifying the text on pages 49, 65 and 79.

A unique copy especially printed for Heredia, and enriched with a dedication from the author to the latter, preserved in its binding with motifs recalling Ancient Greece and made by Canape.

“Heredia was, with Mallarmé, the living poet he most admired and venerated. Louÿs had become Heredia’s son-in-law. The relationship between the two men was, early on, built on their mutual love of poetry and old books. Louÿs wrote to Heredia : “You have been my master in bibliophilia and in literature.” In 1899, Louÿs became Heredia’s son-in-law and their correspondence takes on a more familiar turn. Louÿs will declare having married Louise, Heredia’s daughter, “because of his love for her father”. What bound me to him was certainly not family and it was less and less literature. It is him.” (Le Champ littéraire 1860-1900, M. Pakenham, K. Cameron, J. Kearns, pp. 239-245)