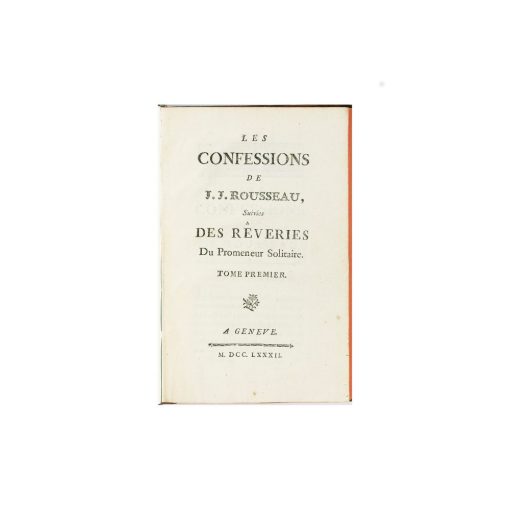 and the Confessions by Jean-Jacques Rousseau.

A precious copy with wide margins
preserved in its contemporary binding.

Rare first edition of the Confessions (books I to VI) and the Rêveries du promeneur solitaire by Jean-Jacques Rousseau.

“The first part (I-VI) was published in Geneva by the Société typographique ; of the three editions it was responsible for in that same year 1782, the priority was apparently given to the separate edition “in large characters”, in two parts, of “Les Confessions de Jean-Jacques R., suivies de Rêveries du Promeneur solitaire”, Genève, 1782.” (Dictionnaire J.J. Rousseau)

“The last studies by Mr Gagnebin (Bibliographie des Confessions dans la Bibliothèque de la Pléiade) enable us, considering the multiple editions published at the same dates, to distinguish as follows the first edition of the Confessions :

A very similar counterfeit of this first edition is easily recognizable through this detail: the fleuron on the titles is not an urn but a rose. Furthermore, if the description of part I is identical to the original, the text of part II is made up of 280 + 295 pp. each instead of 279 + 300.” (Tchemerzine)

The two volumes of the present copy, contemporary bound by the publisher lead us to think that the counterfeit could be a second issue of the first since the fleuron of the title of the first part is here a rose whereas the fleuron of the second part is, as it should be, an urn. We therefore have part I in a second issue or counterfeit and part II in a first issue for this very rare first edition of 1782 printed in large characters in two parts in Geneva.

The Confessions, “the first great autobiography of modern times” (P. P. Clément, Dictionnaire des Œuvres), is made up of 12 books and was published twice: the first six books in 1782 and the rest in December 1789 but in a 4to format.

There is no separate first edition of the 12 books of the Confessions in the same format.

“The Confessions are the flip-side of Rousseau’s political and moral contributions: the polis gives way to the subject. And the subject, here, is Jean-Jacques Rousseau himself, the elected official, the unharmed man who draws his own portrait: self-defense, indeed, but also self-criticism and, evidently, self-portrait. The Confessions are the relay (between Montaigne and Proust) in the art of retelling oneself, to sharpen oneself on the blade of one’s eyes against one’s words.” (Yves Peyré, En Français dans le texte)

In this book, the author admits point blank to his mistakes without separating himself from the history of his era. In this sense, we can call this text Memoirs. But, in the end, he doesn’t so much aspire to confess himself as to paint himself, in order to justify himself. By showing himself to his like-minded contemporaries in “the truth of his nature”, he believes he is making an essential contribution to the history of mankind.

With his natural ways, Jean-Jacques forever puts himself in a difficult position in regards to his era: an artificial era, that only cultivates its pleasure, boredom and the dryness of its heart.”

“Rousseau is, like Tacit, a really great writer. With the exception of Pascal, no one has left such an imprint on our language.” (Victor Cousin)

It is quite rare.

The 10 “Promenades” that make up the Rêveries were written on a daily basis, without any pre-established order, and based on encounters, meditations, souvenirs.

We would never cease to enumerate the works where Rousseau’s Rêveries had a determining influence.

We can mention his most direct disciple, Bernardin de Saint-Pierre ; Rousseau’s influence also pushed (as for the Souffrances du jeune Werther by Goethe) Chateaubriand to write René.

All of the French romantic poets were influenced by Rousseau, whether it be Lamartine’s Méditations poétiques or Victor Hugo’s Feuilles d’Automne.

Out of all of Rousseau’s texts, this is the one that rings closest to us, the one that seems to live on as the author’s true masterpiece.

This first edition of the “Rêveries du Promeneur solitaire” is very rare and very sought-after when preserved in its contemporary binding.

A precious copy, wide-margined, preserved in its contemporary binding.