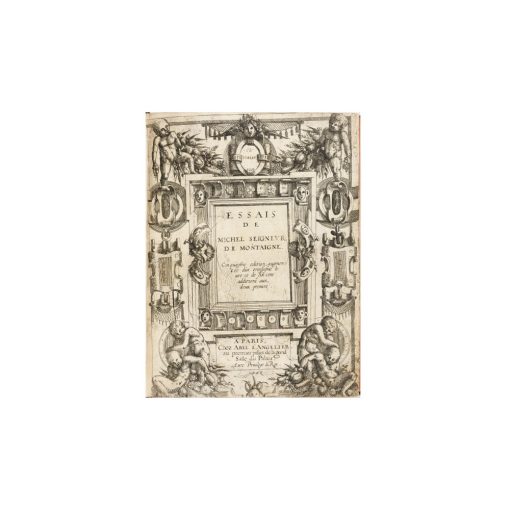 Montaigne’s “Essais” from 1588
preserved in their elegant binding created three centuries ago.

Coming from the libraries of the lawyer Claure Joberd;
of Roqueleyne (member of the Longepierre family) ;
Antoine Louis Vicomte de Busseul ;
Roger Stéphane, whose real name was Roger Worms.

Last edition published in Montaigne’s lifetime, containing the third book in a first edition and the important corrections he added to the first two.

“In 1588 a new edition of the Essais, the last published in the author’s lifetime, included a third volume, and this became the definitive text on which all later editions are based.” (PMM)

It “proffers the last text that Montaigne had definitely finished” (R. Dezeimeris, Recherches sur… les Essais) … before the corrections made by Mademoiselle de Gournay, Montaigne’s “adopter daughter”, who oriented the text towards an interpretation tainted with Christian stoicism.

“Enlarged with a third book and with more than 600 additions to the first two, this “fifth” edition of the Essais – including the famous “missing edition” (the 1587 edition) — possesses 30 % more signs than the 1582 edition. Abel L’Angelier stands among the best printer-publishers of the end of the 16th century and the fact that he published the Essais earned Montaigne his reputation as an author.

Montaigne only adds 13 % of text to the first two books but the third represents on its own 75% of the additions written between 1580 and 1588 with almost 100 000 words in the 1588 edition. The format, bigger than the usual 4to format, gives Montaigne’s book a certain prestige. Most copies are covered in 19th century morocco.” (Philippe Desan)

Books I and II include 641 important additions.

Book III, here published for the first time, develops his philosophy which was more or less dormant in the first two books; this gives the text its whole meaning.

Montaigne undertakes this important review of the Essais from 1585 to 1588, having just left the public life that was his in Bordeaux.

In the quiet setting of the library of his castle, he copiously annotates the first titles and finishes the thirteen chapters of book III, which are among the most important of his work.

“In 1588, the Essais are the object of a new updated edition, entirely reviewed, amended and enlarged with a third book. Montaigne kept until his death the copy of this edition which he loaded with remarks, thoughts and quotes; Pierre de Brach and Marie de Gournay, the author’s “adopted daughter”, established a posthumous edition in 1595 based on this one. To the first two books, that vouch for Montaigne’s original success, is added a third piece; the rigorously more personal, intimate approach of this one guaranteed, better than anything else, the longevity of the Essais.” (Francis Pottiée-Sperry)

A copy of prestigious provenance: Claude Joberd, lawyer at the Parliament of Dijon and savant « Antiquarian » (1566- v. 1640), with his name handwritten on the panels of the frontispiece.

Claude Joberd had received a humanist education, traveling and studying in France and Italy, with long stays in Padua and Rome. He belonged to the first generation of “curious” men from Dijon, all tied to the Parliament of Dijon — like Montaigne in Bordeaux — who collected and studied Roman or Gallic antiquities; a sonnet to his friend Guenebauld is present in Le Réveil de Chyndonnax, the latter’s publication of his discovery in an old Celtic tomb.

It then belonged to C. de Roqueleyne, a member of the same family as Longepierre (signature on one end leaf), and in the 18th century to Antoine Louis, vicomte de Busseul (1756 – 1851), who came from an old noble family from Burgundy (ex-libris).

His aunt Claude-Louise de Busseul was a maid of honor to the princesse de Conti.

Officer in the Gardes du corps, he took part in the defense of the royal family during the Journées d’Octobre in Versailles, then left the country, fought in Condé’s army, and then came back to France in 1814.

In the second half of the 20th century, it was acquired by Roger Stéphane (1919-1994), whose real name was Roger Worms, a writer and co-founder of the Observateur.

A precious and very rare copy here preserved in its elegant binding made three centuries go.