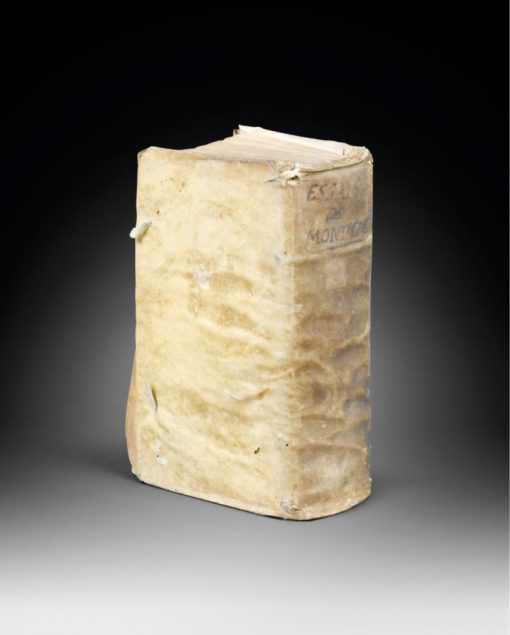 Precious and pleasant 17th century edition of the Essais.

“Sixth and last edition of the Essais under the name of Abel L’Angelier, with a “portico” title, in parts printed according to the pirate editions Leyde A and Leyde B [Geneva] published in 1602. This edition probably results from a seizure of unsold copies to which L’Angelier might have given a new title page. In 1604 L’Angelier still owned the privilege for the Essais. However, the Genevese counterfeits did not allow him to undertake the publication of costly new editions in a market that was as of then too saturated and competitive. Soom after, L’Angelier abandoned the Essais.” (Ph. Desan)

Montaigne never ceased to annotate what he had written and these annotations sometimes somewhat contradict the primitive text but they are a part of the Essais as they are presented to us. (…)

The Essais, which assimilated and transmitted to us, in a simple form, all of the knowledge of Ancient Greece is, at the same time, the first and most decisive modern text.” (Dictionnaire des Œuvres)

When talking about our great masterpieces, we mention Montaigne because he is one of the first to brilliantly represent the French genius which, from Pascal to Bergson to Racine, Vauvenargues or Stendhal produced so many psychologists and moralists.

A copy preserved in its contemporary overlapping vellum.