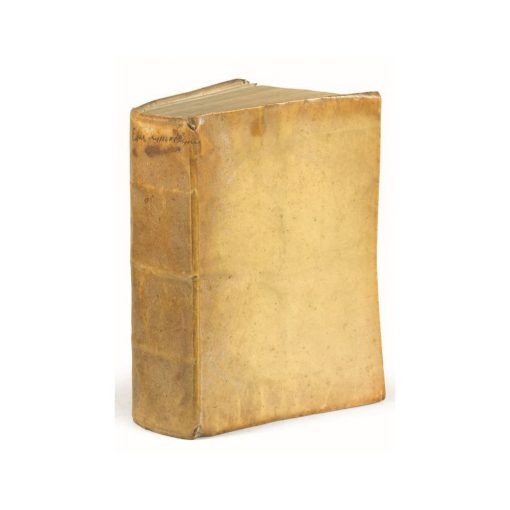 Most important edition since the one from 1598
and the most precious of the 17th century.

Most important edition since the one from 1598 and the most precious of the 17th century, because:

“Mlle de Gournay modified the preface; it is also the first one where the numerous Latin and Greek quotes were translated into French.” (Tchemerzine)

It is decorated with a portrait of Montaigne by Thomas de Leu and a red and black title.

“The printer’s preface details the novelty of this edition, namely that translations are given of the Latin quotations, and also that a revised version of Mlle de Gournay’s long preface precedes the Essais despite her protests that it was unworthy to do so.

The Gournay preface to the Essais is the one from 1595 but largely revised. She has suppressed the militant feminism and most of the personal, self-glorifying remarks.

She has added the refutation of more objections, especially those of Baudius. She publicises her disagreements with the printers, disapproving strongly of the introductory life of Montaigne, the marginal summaries and the indexes. She admits partial responsibility for giving the sources of the quotations, adding that she has been helped by MM. Bergeron, Martinière, Machard and Bignon.

In her introduction to the translations, Mlle de Gournay shows that she has thought in a serious fashion about problems of translating Montaigne’s quotations. She has undertaken the work with reluctance yielding only to pressure from the printers.

The portrait by Thomas de Leu is very close to that of 1608 but there are some differences and also changes in the quatrain.” (Sayce & Maskell)

During that time, Mlle de Gournay sort of becomes Montaigne’s secretary. Together, they prepare the fifth edition of the Essais. Montaigne dies on September 13th 1592. In 1594, Mme Montaigne sends Mlle de Gournay a copy of the Essais that Montaigne was working on in the last period of his life. Thanks to a long stay at Montaigne between 1595 and 1597, she can consult the papers of the writer.” (G. Dotoli, Littérature et société en France au XVIIe siècle)

“This apparently discordant voice will not remain without echo; the edit de Nantes, wanted by Henri IV (who said of Montaigne to Matignon : “Je vous prieray de le croire comme moi-mesme”), an edit of tolerance, is directly in keeping with Montaigne’s ideas.”

An attractive copy preserved in its pure contemporary limp vellum.

Provenance : handwritten ex-libris of a former owner on the end leaf dated 1631: