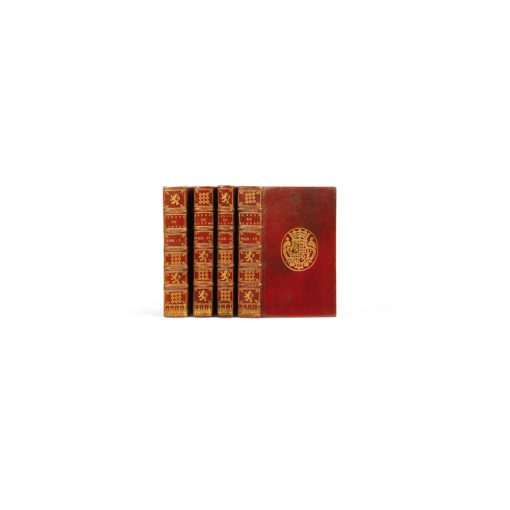 The Montaigne belonging to the Comtesse de Verrue.

A precious and beautiful copy, preserved in its contemporary armorial red morocco binding attributable to Boyet.

The precious 17th century edition of the Essais published the year the text was condemned by Rome.

“It is the last of the 17th century editions to bear the title Essais.” (Ph. Desan)

“In 1669, the Essais is condemned by Rome and prohibited. A long period of editorial silence for the Essais ensues, a real dry period until the 1724 Coste edition.” (Ph. Desan)

In the margins are the names of all the authors mentioned and some notes that facilitate the navigation inside the text.

“A reprint of the 1659 Parisian edition, this portable edition includes a title-frontispiece with the portrait of the author engraved by Mattheus, and repeated on each volume.

With the edition from Lyon, also published in 1669, this is the last of the 17th century editions to bear the title Essais. A few years later, Montaigne’s text will be prohibited by the Church and will only be re-published in 1724 (in London).” (Ph. Desan)

“A nice re-print of the edition given by Journel in 1659, less incorrect than the one by Foppens.” (Brunet)

“After 1669, there is a tendency to reduce Montaigne to his bare minimum. Begins a period where only chosen extracts are published. It is the period of the “moralized Montaigne”.”

The editors of the first half of the 17th century tried to respect the text of the Essais, while adding some tools to facilitate the reading, the second half of the 17th century offers, on the contrary, a “succinct Montaigne”, divided up in a series of concepts that are not really related to one another.” (Ph. Desan, Editer et publier les Essais au XVIIeme siècle)

This edition was esteemed by the great collectors. We know of the copy of the baron de Longepierre in the 18th century, and the baron de Ruble in the 19th century.

Louis Joseph d’Albert de Luynes had his copy bound in 4 volumes, levelling them in size, and apparently entrusted it to Boyet, to whom some of the tools here used can be attributed. It is also Boyet who bound the baron de Longepierre’s copy.

The copy then passed on to his sister, the famous comtesse de Verrue, a bibliophile, who gifted it, as the ex-dono on the endpapers of each volume shows.

A precious copy bound in its contemporary morocco, attributable to Boyet and with the arms of Albert de Luynes.