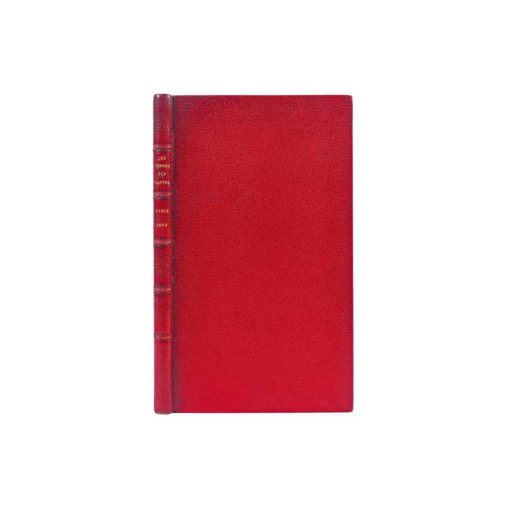 The first edition of the Femmes savantes.

The copy of C. de Cabanoux and John Pierpont Morgan, with ex-libris.

First edition second issue of the last play to be published in Molière’s lifetime.

This is the last play to be published in Molière’s lifetime; it came out a month before his death.

This edition was printed at his expense, under his watch, and in his spelling. He wrote “grédins” instead of “gredins”, “hales” instead of “halles”, “Hauteuil” instead of “Auteuil”… (Tchemerzine)

This five-act comedy in verse was performed for the first time on March 11th, 1672, at the théâtre du Palais-Royal in Paris, not in Versailles.

It was very successful, and its popularity never wavered all through the play’s 215 performances during the reign of Louis XIV.

“Here the author adapts to a change in the mores of the time. Women’s ambitions had grown and the question of whether they should have access to knowledge was raised. The topic chosen by Molière is a risky one because preciosity and conceitedness are difficult traits to portray on a stage. A diligent observer of his society, Molière offers in his Femmes savantes some barely concealed portraits.”

“Les Femmes savantes is one of Molière’s best plays. From a literary perspective, this play is almost perfect. Tradition claims that Boileau had read it and had made some modifications. It is nonetheless true that the Femmes savantes confirms Molière’s qualities as a writer and proves that he was, while writing this play, in full possession of his genius.” (A. J. Guibert)

A precious copy, with beautiful margins, and finely covered in a red morocco binding signed by Trautz-Bauzonnet.