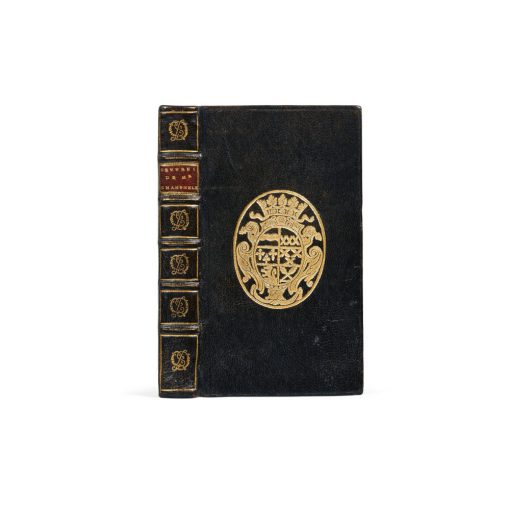 The unpublished fragments of Dom Juan ou le festin de Pierre by Molière,
of which the full text will be published at a later date.

This first edition of Molière is very rare
and even more so in a beautiful contemporary armorial binding.

A superb copy,
preserved in its contemporary black morocco
with the arms of Louis-César de Crémeaux, marquis d’Entragues.

Very rare and important first edition of the unpublished fragments of Dom Juan ou le festin de Pierre by Molière of which the complete text will be published at a later date.

“This is a very rare edition.” (Le Petit)

“The publication of the Festin de Pierre had been preceded by the publication of a small volume containing a good part of the text and titled: Les Fragmens de Molière comédie. Paris, Jean Ribou, 1682.” (Le Petit)

“They are, says M. Paul Lacroix, fragments from the Festin de Pierre, which had not yet been published. Champmeslé took them out of his friend La Fontaine’s wallet to sew them together and arrange them as well as could be in order to create a short comedy… The text of the Fragments differs in many places from the text [published in the collective 1682 edition]; furthermore, there are two or three lovely scenes that are no longer present in the play printed according to the author’s manuscript. It would be easy to conclude that these scenes were invented by Champmeslé ; but no, Molière’s touch is very easily recognizable.” (Le Petit)

This first edition by Molière, now indispensable in any serious Molière collection, is very rare and even more so in a beautiful contemporary armorial binding.

The copy mentioned by Guibert (which passed into the Jean Bonna collection) is bound in simple contemporary calf.

A splendid copy, preserved in its fine black morocco binding with the arms of Louis-César de Crémeaux d’Entragues, lieutenant-général in the Mâconnais government in the first half of the 18th century, and an enlightened bibliophile. (O. Hermal, plche 570)