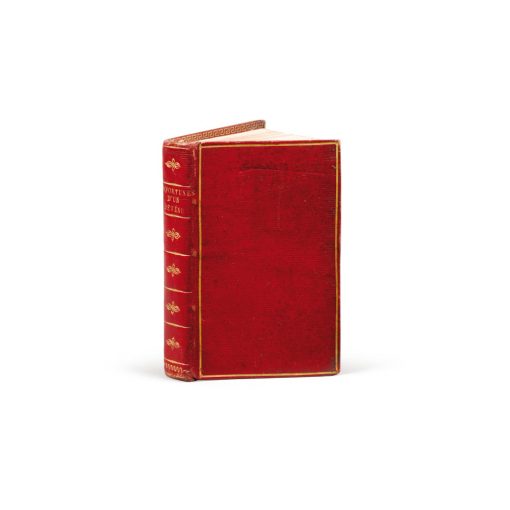 A precious autographed presentation manuscript with a message to his cousin Duval of the first successful anti-Robespierre novel by Joseph-Nicolas de Rosny (1771-1814), which made him famous and enabled him to lead a rich literary career made up of more than eighty books.

In 1797, Rosny published Les Infortunes d’un détenu de la Galetière, a novel where he exposed, not without vigor, the horrors that France went through under the reign of the Convention, and whose success was inevitably linked to its intriguing topic.

“The period of the Terreur saw the emergence of a certain number of new and irregular authors who invested the popular genres of the time like songs or plays. Among those trying to profit from the public orders and to make a name for themselves as “official” writers, the military make up the forefront. A deputy to the general sergent-major of the western army, Rosny is reformed for medical reasons in 1795. It is a real turning point in his trajectory, he entered the military administration and then became a civil servant: he was under-chief of the commission des armées de terre en l’an IV (1796), and then commis d’ordre général auprès du ministre de la Police générale Cochon. In l’an V (1797) he was appointed under-chief of the Bureau de l’esprit public in the same ministry. It is probably at that time that he married the daughter of Gabriel-Antoine-Joseph Hécart (1755-1838), a Parisian bookseller. Between the administration and the bookselling trade, Rosny tried to reinforce his position in the literary world: starting in 1797, he wrote a lot, investing, like a true polygraph, the most diverse genres.

However, Rosny’s activities cannot be distinguished one from another, on the contrary.

If the literary production of the Directoire is still largely unknown, this period can be characterized by an important rise in educational publications that, in different forms, take part in the vast enterprise of “republicanization of the minds”. Under-chief of the Bureau de l’esprit public, Rosny undeniably profits from the political context linked to the republican counter-offensive, confirming the studies undertaken by François de Neufchâteau on the different employees of the ministère de l’Intérieur, and revealing the strong permeability existing between the administrative and the literary worlds under the Directoire.

In his fictive memoirs published in 1797, the Infortunes de Mr de La Galetierre, presented as a “monument of shame and barbary”, he multiplied his virulent attacks against the personnel of l’an II and reduced the policies lead by the revolutionary government to violence and barbary : “In sharing with the public parts of the horrors committed under the reign of the Terreur, he tries to interest the people and warn it against this new system of blood and anarchy.” Rosny, well-aware of the trends, justified his writing as being his mission in the service of the Republic.” (Jean-Luc Chappey, Les Tribulations de Joseph Rosny, Juin 2009)