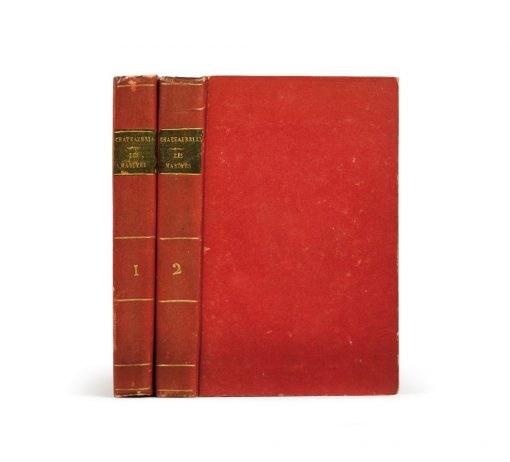 “A rare and sought-after copy
in its contemporary binding” (Carteret)

First edition of this « rare and sought-after copy in its contemporary binding » (Carteret).

The 10-page book catalog mentioned by Vicaire is present at the end of the second volume.

Delécluze says in Souvenirs that reading the Martyrs “brought about new ideas, sentiments and images in young people’s imaginations and induced a spontaneous revolution in their minds.” In his Journal, he includes the Martyrs in the prose writings that “somewhat awakened the French’s conventional minds.”

The author confessed that “in the Martyrs, politics is everywhere”.

“The Martyrs is a novel, a heroic poem destined to support a theory and a series of descriptions taken from the author’s travels. The novel is well-built, always interesting and the characters have original personalities.

The Martyrs was attacked when published for political reasons : the author’s depiction of the Roman Empire was seen to be a criticism of the actual political regime. However, the book was a huge success : not only was the Martyrs appreciated by the elite but it became a popular book and had considerable influence.

The book contributed to giving a better understanding of Ancient Greece and Rome, which was largely ignored by the masses, and renewed the public’s interest for Greece and Rome ; mostly it had the merit of drawing attention to the beginnings of the history of France.

In this regard, it had a decisive influence on the study of history in France.

Augustin Thierry later claimed that it was because he read about the Francs of Pharamond that he became a historian ; and we can say, without exaggerating, that the French historical school of the 19th century was born out of that poem. » (Dictionnaire des Œuvres)

A precious copy, entirely untrimmed, wide-margined, preserved in its contemporary binding, a rare and sought-after condition.