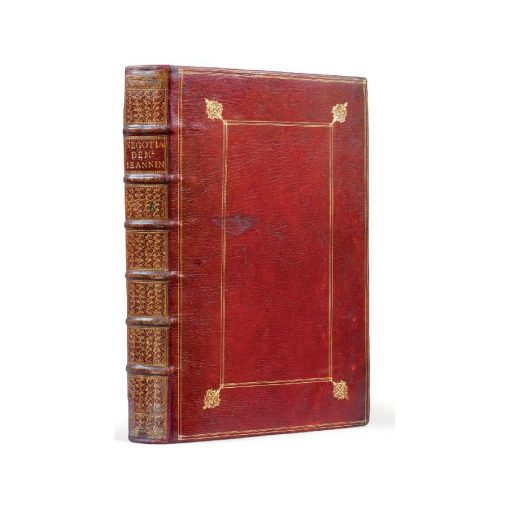 First edition of the “Négociations” by the Président Jeannin.

A very beautiful copy, wide-margined,
preserved in its contemporary morocco, a rare condition.

First edition of these important memoirs on the Ligue and the Wars of religion.

Dedicated to the surintendant Nicolas Fouquet, this edition includes a beautiful portrait of Jeannin by Nanteuil.

“These memoirs are mostly important in regards to the end of the 16th century and the reign of Henri IV. But one can also read about the États-Généraux of 1614, the assembly of the notables in 1617, or the disagreements that arose between Marie de Medici and Louis XIII.” (Bourgeois et André)

Known as President Jeannin, Pierre Jeannin, the son of a tanner, only owed to his own merit the fact that he ended up at the highest level of the magistracy and was later appointed minister of king Henri IV.

A deputy of the Tiers at the Etats de Blois in 1576, he denounced the fact that the Guise had pushed the members of the assembly to use force against the Huguenots.

Jeannin supported the party of moderation and peace. He played an important role during the Ligue and then during the reigns of Henri III, Henri IV and the regency of Marie de Medici. In 1607, he was sent to Holland to stop the united Provinces from getting too close to Spain. Président of the Parlement de Bourgogne, Pierre Jeannin played an important part in the preparation of the Edit de Nantes.

After the death of Henri IV and Sully’s retirement, Marie de Medici relied on Jeannin and trusted him with the general administration of finances.

“The pieces relative to the negotiation in Hollande take up a large part in Jeannin’s Œuvres. “The Négociations, says M. Avenel, has permitted this able diplomat to become known. In his correspondence, he exposes, with a rare sagacity, the state of all the different powers of Europe ; he reveals their intrigues, their projects, calculates their strength, warns about what is to be feared, advises on the best ways to proceed and indicates the best ways of being successful.

To this superior talent, add a complete personal disinterest, an antique character, an accommodating spirit, a calm and kind disposition, a justified zeal for the education of the youth and finally an enlightened sympathy for literature and for science, and you will have all of the traits that make up this remarkable man.

Richelieu gives a great testimony of Jeannin : “One could never praise him enough. He has always sought to serve more than please ; this valiant man belonged to a century less corrupt than ours.” (Hoefer)

“The Négociations is considered to be the best Model that Politicians and Negotiators should follow. The cardinal Richelieu read “Les Négociations” by Jeannin every day during his Avignon retreat, finding there to always be something to learn.” (Michaud, Bibliographie générale, XI, 24)