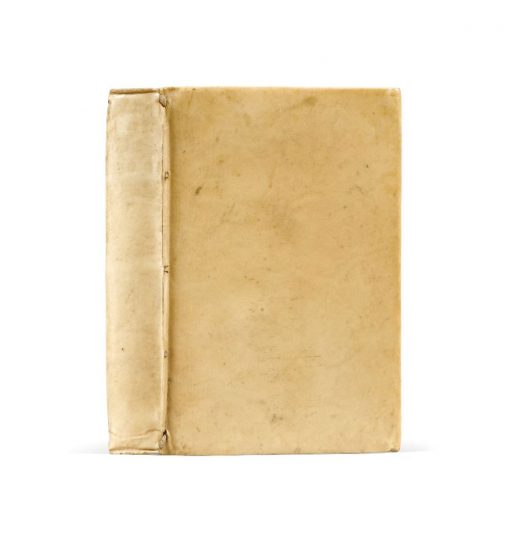 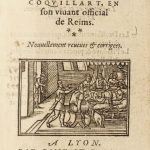 “The rarest edition of the Œuvres by Coquillart

published in the 16th century” (Catalogue A. Firmin-Didot)

« Rare and good edition, probably based on the one by G. du Pré. » (Tchemerzine)

« One rarely finds the Œuvres by Coquillart in a modern library. Of the several editions published there is only one known copy left. When these relics with the old typography resurface, bibliophiles everywhere fight for them, raising the prices to incredible levels. Lyon, this haven of humanities in the 15th and 16th century, this city where the printing industry shone so illustriously, also wanted to publish a Coquillart. The Manuel du libraire mentions one 16mo edition made by Benoist Rigaud in Lyon in 1579. We have not been able to see it.” (Les Œuvres de Guillaume Coquillart, 1847, Tome II)

“Guillaume Coquillart weaves, with an unbridled verve, a portrait of the gallant bourgeois life of his time abounding with precisely crafted caricatures. It seems Coquillart imitated Villon and borrowed from him the most external aspects of his style.”

In his youth, Guillaume Coquillart was an important comedic writer. He died in 1510, a considered and considerable citizen of Reims. His plays seem to have given him even more authority.

His works made him a favorite of the public and other writers. He is mentioned by Clément Marot next to Villon, Jean Molinet and Jean Le Maire.

Guillaume Coquillart comes from a law-practicing family, that took part in the affairs of the city. His father was a translator and a poet on occasion. He was born around 1452.

In 1477, he receives a bachelor’s in canon law in Paris. It is during his years of studies that he produces most of his work, mostly comical plays. The Plaidoié and the Enqueste d’entre la Simple et la Rusee are the two parts of a parodic trial where two women are fighting over a young man, the Mignon. Both plays were written for the Carnivals of 1478 and 1479, in the same spirit as the Droitz nouveaulx (1480). It is not drama, it is only entertainment. Through the use of scabrous language and codes, the author solves cases similar to those in the Arrêts d’amour by Martial d’Auvergne.

The Monologue Coquillard or de la botte de foin belong to this same time period (around 1480).

This time, there is no trial and no judicially-inspired humor. A young, vain and elegant lover arrives on stage to tell us of his woes : his mistress’ husband came home without notice and he had to spend the night in the attic, hidden under a bale of hay.

He is considered to be the inventor of the theatrical monologue.

A precious and beautiful copy preserved in its contemporary ivory vellum binding.

The great French Renaissance poets kept in their contemporary bindings are considered masterpieces of bibliophily.

Our research has only allowed us to locate 4 copies in the International Public institutions : BM Lyon, Lille, Toulouse and Chantilly.

Seems to be missing at the BnF.