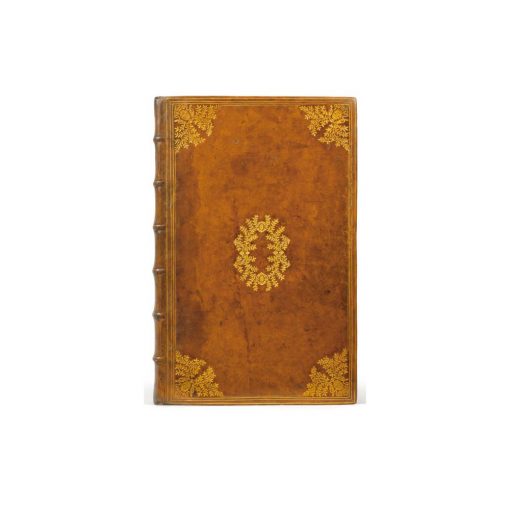 The great first edition of Ronsard’s Œuvres,
the last published in his lifetime.

“This edition is actually the poet’s last will,

as he was to disappear the following year” (J. P. Barbier).

The most sought-after of the first editions of Ronsard’s Œuvres, as it is the last one published in his lifetime.

A magnificent volume, this masterpiece of typographic print, printed on 2 columns, shows an elegant sense of the layout of the pages, with an alternation of roman and italic characters and an abundance of ornaments: decorated initials, head and tail pieces.

Its format testifies to Ronsard’s fame, the “prince of poets”: this book of French poetry is the first one to have the privilege of a folio format.

This edition, very precious, has always been considered by the bibliographers as the “Bible of poetry of its era”, Ronsard’s “complete literary soul-searching endeavor” or even a “supreme gift to posterity”.

It testifies to the poet’s will to amend his work, seeing that he removed some pieces he considered too imperfect to be given to posterity, reviewed the presentation of the poems and carved his precious life’s work.

“Ronsard entered the forest of his poems like the lumberjack in the forest of Gastine. He cut a whole lot, being cruel towards himself, but always for esthetical reasons and not, as some have said, for reasons of convenience or politics.” (P. Champion)

“The pieces written in the last months of his life are as brilliant as the ones before and Ronsard is in full possession of his means, never satisfied, as he looks for a new “oeconomy” in his Œuvres, a “very royal “oeconomy””. (Daniel Menager)

– “Magie ou Délivrance d’amour”, an elegy on the hunting book by the late king Charles IX.

– Mascarade aux Dames et trois cartels, written for the wedding of Henri III’s favorite, the duc de Joyeuse, with Marguerite, the sovereign’s sister, a prognosis on the miseries of the time.

– The Epitaphe of Marie Brachet and Epitaphes des Mignons du roi, killed in a duel in April 1578.

“This edition is actually the poet’s last will, as he was to disappear the following year.” (J. P. Barbier)

This important and superb edition, extremely rare, ““more precious than any” according to M. Gandar since it was to be the last expression of the poet’s thoughts, as he died the following year” (Brunet), is decorated with beautiful woodcuts of Ronsard, Charles IX, Henri III and M. A. de Muret.

A magnificent copy, ruled, with very wide margins, unwashed, and whose contemporary binding presents admirably decorated covers in the fashion of the French Renaissance.

The sixth collected edition of the works of Ronsard, the first folio, and the last of any kind to be issued under the supervision of the poet, who died the following year.

This edition was a worthy climax to his career, for it is a model of completeness and of typographical beauty.