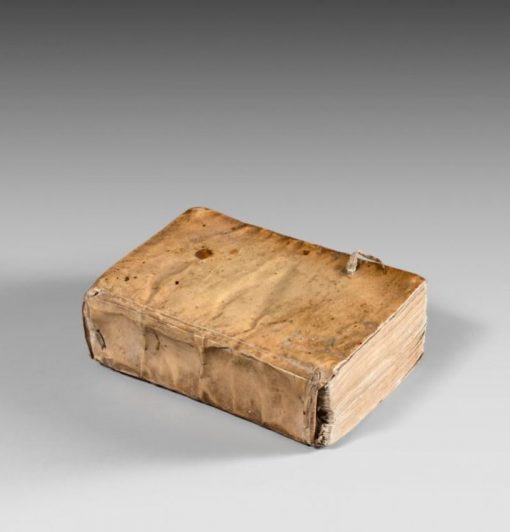 “According to Henri Mondor, a falling out, maybe somewhat comparable to what Verlaine and Rimbaud went through, separated Théophile de Viau from Guez de Balzac”.

Ivory vellum, traces of ties, rusting in some leaves, some marginal worm holes without loss of text. Contemporary binding.

Very rare, it is missing at the B. n. F. and Tchemerzine, having never seen it, gives an erroneous description, not mentioning the existence of parts II, with 160 pages, and III, with 203 pages (Tchemerzine, V, 863).

Lachèvre mentions “Theophile’s famous letter against Balzac” published in the Discours d’Aristarque à Nicandre (Rouen 1628), second edition, but he has never seen the first edition of this letter.

Theophile’s famous letter against Balzac, which closes the volume, is one of the most powerful texts of French literature. It relates, with no indulgence whatsoever, the hate between these two contemporary authors who had been lovers: Théophile and Guez de Balzac. In the warning to the reader, the editor relates the discovery of the letter and declares it was never printed in Rouen :

The famous quarrel about the Letters essentially concerned Theophile, Balzac and father Garasse.

“The first printed trace in reaction to Balzac’s Lettres consists of an answer by François Garasse to the mocking criticism that Balzac, in his Lettres, had proffered against the Doctrine curieuse des beaux esprits de ce temps, the anti-libertine pamphlet (directly attacking Théophile) which the Jesuit had published in 1623-1624. Balzac had attacked his violently “satirical” style and his passionate virulence, in a missive carefully limited to a criticism of form and expression, but not without echo with the current events, however, because when the Lettres were published, Théophile was still in prison. Did Balzac undertake to defend the poet, whom he knew well? His approach is complex because far from joining Theophile’s partisans, the Lettres, on the contrary, and parallel to his attacks against Garasse, reveal two letters which violently tackle him. In fact, in such a worrisome context for the literary world of the time due to the threat bearing on Theophile, and which left some to wonder if mundane literature was not under fire of a Catholic offensive, it seems the letter writer was looking for a way to save his writings and himself, without renouncing to a certain form of freedom of expression. The joined attack on Garasse and Théophile seems to outline this.”

Théophile’s place in French literature is essential. According to Ant. Adam, he “renewed French poetry”, he is “the first of our great classical writers of prose”. He lived in the libertine circles and was in opposition to the Jesuits, who deployed all of their efforts so as to have him condemned. His paraphrase of the Phedon, under the title Traicté de l’immortalité de l’âme, ranked him among the followers of Giordano Bruno and Vanini and the boldness of his licentious verses have darkened the picture that they drew of him. “He only met with flames in the form of a straw man wearing a satin doublet, but he was nonetheless condemned, and his friends were doubly distraught, because of the threat that he faced and his anguish…” (R. Pintard)

Théophile de Viau died at 36 years of age, more worn out, says Henri Mondor, by his persecutors than by his libertine way of life. Assured, however, by the best literary minds of his time, of literary immortality… he was one of the great French lyrical poets. The waning beauty of women, their smiling betrayals, their decrepit old age… particularly inspired him… the graces of his natural tone foreshadowed La Fontaine ; his bravery and freedom followed Villon. Mallarmé… considered Théophile de Viau so highly that such grace honored them both.

A first exile had lead the poet to Holland, with Guez de Balzac. According to Henri Mondor, a falling out, maybe somewhat comparable to what Verlaine and Rimbaud went through, separated them. Back in France, pensioned by Louis XIII, Théophile de Viau again fled, to England, where he was welcomed by the duke of Buckingham; returned in 1621, he abjured his Protestant faith and blended with the cabaret poets of the île Saint-Louis ; accused of being the author of scandalous poems, he was arrested and incarcerated in the cell where Ravaillac was imprisoned. At the end of his long trial, he benefited from the king’s protection and was only burned in effigy.

“Many times reedited, his “poetical works” will know at the end of the 17th century such as success that even Malherbe’s glory will seem pale in comparison. More musical than Racan, more robust than Tristan, the bird Théophile travels through the centuries more happily than he did his own lifetime.” Antoine Duminaret

His natural lyricism and his vivacious imagination will profoundly renew baroque poetry. To religious inspiration the poet substitutes the exaltation of nature, testifying to an epicurean naturalism with clear materialistic tendencies.

Wearing his sensitivity like a badge, Théophile sings about solitude, amorous passion and the beauty of nature.

Precious and rare copy preserved in its first contemporary vellum binding of the first collective edition of Théophile de Viau’s Œuvres, undoubtedly the most important because it includes the first literary letter relating the homosexuality of two eminent writers of the French language: Théophile and Balzac, which enabled Henri Mondor to present this letter as reflecting the falling-out that they had, maybe comparable to the one between Verlaine and Rimbaud.