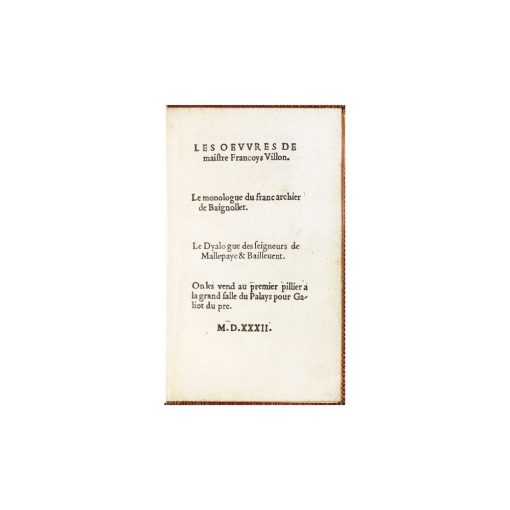 printed in 1541,
preserved in their overlapping ivory vellum.

The copy comes from the library of Du Bourg de Bozas.

8vo of 63 ll. with the mark of the Angeliers on the verso of leaf 63 ; complete ; the blank leaf was removed and the mark leaf is present and was inserted by the binder in the 17th century.

(Tchemerzine IV, p. 491. b. with the address of Jean Ruelle, no collation). Complete.

Precious and extremely rare edition reuniting in the year 1541 Clément Marot’s Œuvres to François Villon’s of which Tchemerzine only mentions one complete copy, describing (V, 979) only the sixth part, the Œuvres by François Villon.

After Galliot du Pré (1532) and Bonnemère (1533), Clément Marot was, in commenting his work (1533), the last in the 16th century to recognize François Villon, his father’s contemporary, as one of our great poets.

“Villon is the first great poet in the modern sense, the first in whom we can recognize the soul of the astounding poet, as France conceived him, as Paris created him, as he has remained and as he should be since master François… Villon’s emotions are violent, profound. But if they deprive him of will, they do not deprive him of reason.” (André Suarès)

“The poetic trade, where had he learned it? By reading good authors to which he had access to thanks to the “library” of his friends in high places, the d’Estoutevilles and the Cotarts : authors of the second half of the 13th century like Jean de Meun, and his continuation of the Roman de la Rose, or from the second half of the 14th century,  like Eustache Deschamps, to whom he borrowed the idea of the comical legacy and whose Art de seconde rhétorique taught him the secrets of fixed form poems, rondel, rondeau, chant royal, lai, virelai and ballade, and of the first half of the 15th century: Alain Chartier, the author of La Dame sans merci, and of course his contemporary, Charles d’Orléans, who dabbled in them also. Then there was also an education by ear, brought about by listening to “farces, games, moralities”, mysteries to which he assisted at the Table de marbre des clercs du Palais. But, really, it is inside himself that he found the secrets of the metaphor that all of these texts could not teach him.

Above all, he is, and forever will be, the master of the ballade. He acquired such superiority in the Livre des cent ballades and gives off an impression of such ease and facility ; it is the epitome of art. I would say as much about his language, so simple and natural it doesn’t even need to be translated for today’s readers, but that should not pull the wool over our eyes. It may not have been as such for his contemporaries in the 1460’s where his style must have had the stark colors of a canvas or a wood panel coming out of a workshop. He renounced and disdained any musical accompaniment imposed on our lyrical poetry, and he is one of the first who called for the separation of music and poetry, the latter needing to content itself, from now on, with its own harmony. His “farfadet” contains two thousand verses. Printed, one can hold it in the palm of one’s hand; these two thousand verses are worth their weight in gold.” (Gustave Cohen)

Clément Marot was not only the “Poëte de Roy”, he was also, and foremost, the poet of a whole nation being born. To read Thomas Sébillet after having read Pierre Fabri, to go from the Verger or the Séjour d’Honneur et du Jardin de plaisance to Ronsard’s Odes and Amours or Du Bellay’ Regrets, is truly like going from one world to another and understanding that, in the history of our poetry, Marot is the craftsman of all these metamorphoses. He is the author of a work whose complexity and depth only equal its power of renewal. He deserved, at least as much as his successor Ronsard, to be in his lifetime considered as the prince of poets of his time.

A precious copy, complete, preserved in its 17th century overlapping ivory vellum binding from the prestigious library “Du Bourg de Bozas” in the castle of Prye sold 30 000 € 26 years ago (Ref. Bibliothèque du Château de Prye, 27-28 juin 1990, Drouot Montaigne, n°67) and described by Madame Vidal-Megret in the sales catalogue as such :

“We only know of four copies of this edition, one of which, the one belonging to the Comte d’Hoym (later passed into the sale of the library J. Tannery I, N° 89) and described in the Bulletin du Bibliophile on 20 February 1939 is missing the last part, which is the principal attraction of this edition since it is Villon’s Œuvres published by Marot. Another copy is present in the Berlin library. There are only two complete copies left in private collections, this one among them, and all the more precious as it is in its first vellum binding. It is in very good condition but with short margins; some water stains.” (Mme J. Vidal-Mégret)

The extremely rare copies in old bindings reuniting Marot’s Œuvres to Villon’s and printed around the year 1540 have seen their prices greatly increase since the Bourg de Bozas sale. In 2007, a copy printed the following year, in 1542, bound at the end of the 17th century, was sold 98 000 € (Ref. Manuscrits et Livres précieux. Catalogue XXXVI, n°19).