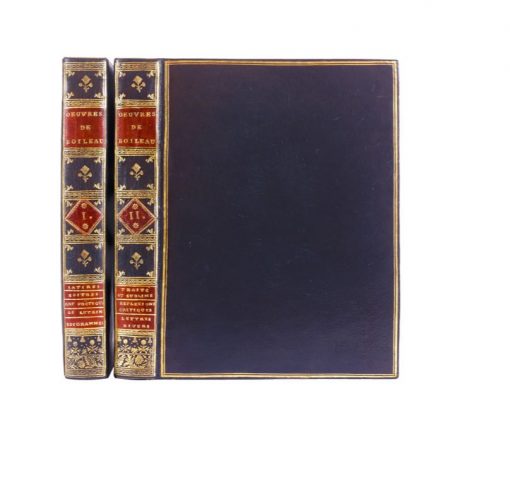 Complete copy of the remaining figures by Cochin
for Le Lutrin.

« The fact that the spelling of Boileau was not modernized
makes this edition really interesting
» (Cohen).

Enlarged edition “with a preface, the praise of Despréaux by de Bose and du Bolaeana by de Monchesnay” (Quérard).

It contains the praise of M. de Boze, the Bolaeana, the Satires, the Epistles, the Art of poetry, several odes, discourses, epigrams and poetries, the treaty on the sublime, and some critical thoughts…

It is “decorated with a portrait by Rigaud, 1 floral ornament, 7 vignettes by Trémolières, engraved by Ravenet, 38 tail-pieces et 6 tooled letters, of which one is repeated, and 1 floral ornament with shield on top of the preface. The fact that the spelling of Boileau was not modernized like in all the others confers a real interest to this edition.” (Cohen)

“Edition including the figures by Cochin, which are not always found in the different copies from this edition. Added to the beauty of the characters, this book holds its rank amongst typographical rarities” (Desessarts).

Copy containing the remaining six magnificent figures by Cochin for le Lutrin, with a storied frame; they are often missing in the different copies of this edition.

“We believe these are the first proofs later used in the 1747 edition, without the frame” (Cohen).

“His books contain multitudes of indications and hints that we could not understand without the commentaries. A friend of Boileau’s wanted to add some explanations to his work and he supported him. This friend was Brossette. The abbot Souchay took it upon himself to compensate Brossette’s omissions and one still reads with interest the editions he published in 1735 (2 vol. 12mo) and 1740 (2 vol. 4to). Boileau’s poetic charm and perfect taste had earned him the title of France’s classical poet ; his authority was that of a legitimate monarch’s” (Barbier).

“Because of his many great qualities, he will always stay at the top of the French firmament. The main editions of Boileau’s work are those by Brossette, his friend, published by Souchay in 1740, and those by Didot in 1789 and 1819” (E. M. Courtin).

“Boileau is the first of our many poets to put expose the richness of our language and who, through his work, allowed it to become the esteemed language it has become ; the one who, more than anyone else, showed the value of good taste. We single out the edition of the widow Alix, 1740, with figures by Cochin. Added to the beauty of the characters, this book holds its rank amongst the typographical rarities” (Desessarts).

Provenance : Library of Marchal, with ex-libris on endpaper.