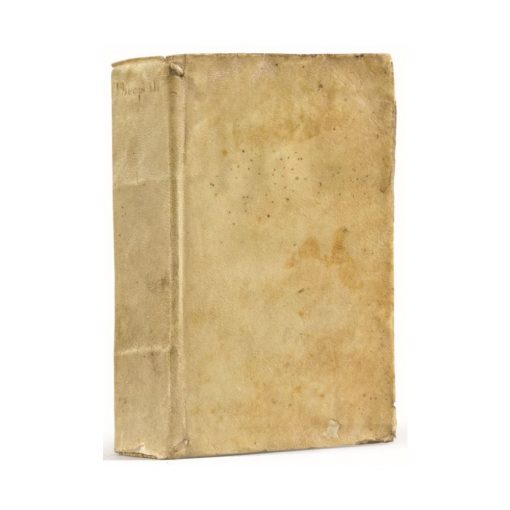 Théophile de Viau’s Œuvres,
judged in absentia and condemned to the pyre.

A copy preserved in its contemporary vellum.

“Théophile de Viau is the most read poet of his time, a poet in love with freedom, desirous of living as he wishes and of writing according to his fancy, pushed by his temperament and uncoerced by rules”. (Lagarde et Michard – Hatier)

Théophile, at a time most in favor, followed the king in Languedoc, assisted to the siege of Clairac, his native town, and, in 1622, abjured his childhood religion. In vain. He did not manage to avoid scandal, aggravated in 1623 by the publication of his second collection and, especially the Parnasse satyrique, and which had the most terrible consequences : Théophile, on the lam, is judged in absentia and condemned to the pyre.

On the 19th of August, the poet’s effigy and his works are burned on the place de Grève. Arrested in September, brought to the Châtelet prison, he remains there from 1623 to 1625 and writes some of his most renowned pieces: the “Lettre de Théophile à son frère” and the Maison de Sylvie, followed by ten odes started in Chantilly, the residence of his protector, Henri de Montmorency.

Thanks to the intervention of his beloved friend des Barreaux and to the incompetence of his opponents, Théophile escaped the pyre. Banned and then pardoned, he died a year after his liberation, at the age of 36, probably because of what he endured in captivity.

“His “Œuvres poétiques” will know in the 17th century such a success that even Malherbe’s glory will seem pale in comparison. Is Théophile’s best work in the bare prose of his letters, in his “Apologie au roi”, in the Latin short story “Larissa”, in the “Fragments d’une histoire comique”, or in the flamboyant lyricism of his tragedies “Pasiphaé”, “Pyrame” and “Thisbé” ? More musical than Racan, more robust than Tristan, the bird Théophile travels through the centuries more happily than he did his own lifetime.” (Dictionnaire des Auteurs, A. Duminaret)

Many of his admirers did not hesitate to use the most hyperbolic metaphors to define him: “Apollo of our time”, “king of the spirits”, “Light of the French poets”, “Immortal spirit”… Saint-Amant, in particular, in the play which opens the Oeuvres by Théophile de Viau of 1621, speaks of his friend as such: “This great and divine Oracle, / Who shows with all of his words / the effects of some miracle”, whereas the young Tristan L’Hermite, in a letter written in the fall of 1625, shows that he considers him a true master: “You complain with such grace of Apollo that it does not seem as if you would have reason to complain. All of your writings shine so strongly of these divine presents that you would have difficulty convincing him of ingratitude. If all those whose hairs have whitened while watching over the Parnasse were in such a favor with the Muses, great writers like yourself would not be as rare as they are, and many great minds of this century would wish to have your glory despite the persecutions you endured and the fever which plagues you.”

Georges de Scudéry, without contest the one who most ardently praised him, in an ode written while he was locked up in the Conciergerie, mentions him with periphrases such as these: “Phoebus in prison”, “God of verses”, “great immortal spirit [of which] all of France/ could not limit the fame”. In the Tombeau de Théophile that he inserted at the beginning of the 1632 edition of the Œuvres complètes of our poet, the same Scudéry imagines that Malherbe and Ronsard pay him homage, adding that his fame will be eternal because there is nothing to amend in his work. Some years later, in his choice edition of a selection of French and Latin letters by Théophile, after having claimed in the dedication epistle to the Cardinal de Richelieu that his friend and master is “one of the first Spirits of our time”, Jean Mairet ends his notice to the reader by affirming that “Montaigne and him are the two Senecas of our time and language”. (G. Saba, Théophile de Viau un poète rebelle)

Copy preserved in its contemporary vellum.