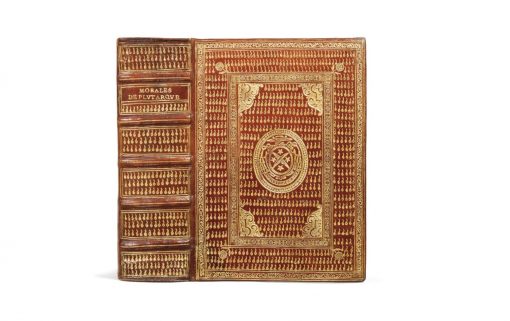 A precious and extremely rare copy of Plutarch’s Œuvres morales
in the famous translation given by Amyot,
preserved in its spectacular morocco binding
with the arms of Jean de Richardot,
bishop of Arras from 1602 to 1610.

Red morocco, double frame of gilt friezes on the covers, flowers and large corner-pieces in the corners, with tears in gilt entirely present on the covers and the spine, arms stamped in gilt in the center, ribbed spine, gilt fillet on leading edges, inner gilt roll-stamp, gilt edges. Contemporary binding.

Amyot came to Paris at a young age to attend the public teachings at the Collège de France that François Ier had just founded.

He translated into French all of Plutarch’s works of which was said, rightly so, that he had made a French book out of it.

The pages relating the ends of Demosthenes, Cicero, Themistocles, Pompeo or Anthony’s fatal pursuit after Cleopatra, or Marius’ meditations in front of the ruins of Cartago, are worthy, in their dramatic composition, of the noblest classical art.

“Plutarch never recites but manages to seduce the reader through the moral elevation and the humanity with which he reveals the secrets of the greatest souls.”

It is thanks to Amyot that Plutarch became “the good Plutarch” and that he was a master of humanism to many generations.

One remembers the fervor with which Montaigne read Plutarch, and he was not the only one.

All of the late 16th century’s knowledge of antiquity was due to Amyot’s Plutarch.

But Plutarch’s Œuvres are also a monument of French language.

“The charm of the style and the purity of the language are some of the attractive traits of the book, and not the least.

Amyot was one of the creators of this beautiful 16th century language, original and naïve, abundant, colorful, natural, picturesque and harmonious, and his translation, despite some infidelities, has not been abandoned since and has remained one of the most beautiful monuments of our old literature.

In the old style of the translator, says Racine, lies a grace that I don’t think can now be equaled in our modern language.”

A spectacular binding with the arms of Jean de Richardot, bishop of Arras from 1602 to 1610.