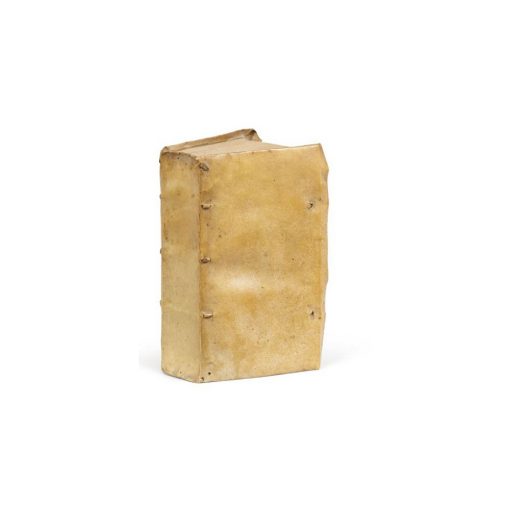 “Definitive edition”, partly first, of the Œuvres by Amadis Jamyn, published while he was alive and enlarged with several texts not present in the first of 1575 or the second of 1577. It will be re-printed in 1582.

“Even though I hold Jamyn’s poetry in better esteem than Ronsard’s, even though I find the disciple to be more natural, less stiff and less emphatic than the master, nothing could lead me to believe that the poems have been so sought-after that three editions in less than eight years had to be made.” (l’Abbé Goujet)

“This judgement results from the high esteem that the abbot had of Desportes, Jamyn’s successful rival, as to the imitation of Italian neo-Petrarch poets, when Mme de Retz and the other précieuses served as arbiters in literary jousts that illuminated the happy times of the last years of Charles IX’s reign.” (J. P. Barbier)

Amadis Jamyn (1538-1593) was the favorite disciple of Ronsard who had him appointed secretary to the king’s chambers. He studied the Classics with Dorat and Turnèbre. Known for his erudition, he continued the translation of the Iliad undertaken by Hugues Salel, and put into verse the last thirteen books of the Homeric poem. Then he started the translation of the Odyssey, which he abandoned on the third book. This translation shows a real poetic mastery and great rigor in terms of versification. The Œuvres by Jamyn comprise of elegies, sonnets, some of which are assembled under a common title : Artémis, Oriane, and some great poems like “Le Poème de la chasse”.

This 1579 edition is rarely still found in its first and attractive contemporary vellum binding. Jacques Guérin owned a beautiful copy of Jamyn’s “Œuvres poétiques”, printed in Paris in 1575 and also bound in contemporary vellum, that sold 24 500 € at Maître Tajan’s on 7 June 1990, 26 years ago (Livres exceptionnels, n° 28).