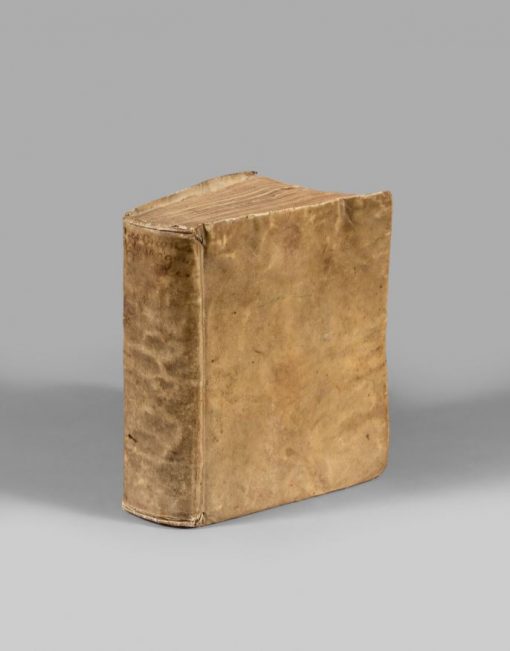 “Ménage had a considerable influence on the formation of the French language.”

First edition of one of the most important dictionaries of the French language, preserved in its contemporary vellum.

First edition of Ménage’s main book that had a profound influence on the evolution of the French language.

“Of Ménage, we have “Les Origines de la langue française, Paris, 1650” ; a much superior work to all the ones previously published.” (Ph. Le Bas, Dictionnaire Encyclopédique, X, pp.703-704)

“In the 16th century, the science of etymology made great progress. Were published “Origines Françoises” by Budé, de Baïf, Henri Etienne & several others. M. l’Abbé Ménage, who possessed a great knowledge of Literature, the Ancient languages and some modern ones, got started after them and surpassed them all. His “Origines de la Langue Françoise” was published in 1650 to the almost unanimous applause of scholars and intellectuals and he received the compliments of the queen Christina of Sweden, who praised him “for not only knowing the words but also knowing where they were going”. (Mercure Français, Décembre 1749)

“A man of sience, a precursor of the modern etymologists, Ménage was also a man of the world. He frequented the Hôtel de Lesdiguières and the Hôtel de Rambouillet where he was almost considered like an oracle. Mme de Lafayette and Mme de Sévigné found in him a professor, an admirer and a friend.” (E. Bury, Dictionnaire des Lettres françaises)

In the vast movement created by the founding of the Académie Française and the slow elaboration of its Dictionnaire de l’Académie française, this work by Gilles Ménage (1613-1692) plays an important part.

A clergyman protected by the greats, one of the pillars of the Hôtel de Rambouillet, an erudite but somewhat pedantic savant and, in his time, one of the masters of the French language and its origins, Ménage had a great influence on the formation of the classical French language.

The Requeste des Dictionnaires, his first text (1649), is contemporary to the beginning of the Académie’s mission; after having hesitated on the action it could undertake, the Académie had, following the chaplain’s advice, decided to begin its “embellishment of the language” that was to become, in the minds of the académiciens, the Dictionnaire.

The Dictionnaire Étymologique by Oscar Bloch and Walter Von Wartburgle often mentions it.

A precious copy of this first uncommon edition preserved in its contemporary ivory vellum.