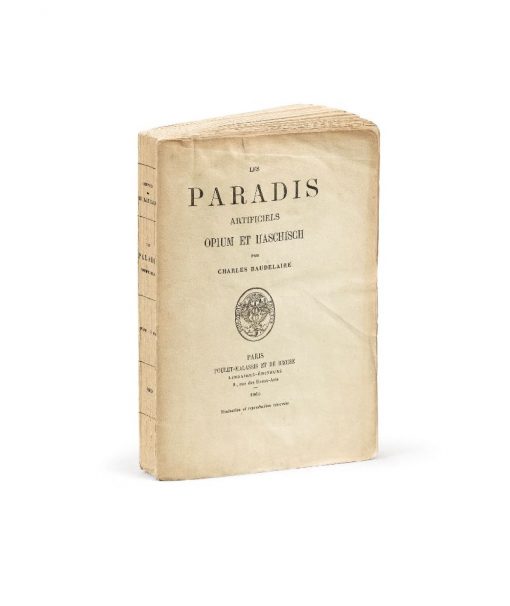 First edition of the Paradis artificiels by Charles Baudelaire.

Precious copy from the first issue,
with the title at the correct date of 1860,
untrimmed, partly uncut, under its original wrappers, as issued,
in a rare and sought-after condition.

Copy from the first issue, with the title at the correct date of 1860 (lots of copies bear a relay-title date of 1861).

Like Gautier or Nerval, Baudelaire took an early interest in hashish and had participated, at a young age, in the « haschischins’ club ».

The « Poème du haschisch » is a half-philosophical, half-scientific treaty on the nature, the use and the effects of the oriental drug.

Having postulated that it’s through the strange depravation of the sense of infinity that man renders himself guilty of the worst excesses and seeks to find in hashish or opium an « artificial paradise », Baudelaire decides to write a « monography of [the] drunkenness » provoked by the famous drug. The latter takes up four chapters in which Baudelaire, alternating points of view, systematically examines all aspects of the problem, whether it be psychological, psychic or moral. His analysis is quite rigorous and economical ; and even though Baudelaire’s tone is somewhat aloof, being a moralist akin to the prestige of evil, he untangles with lucidity everything contained, be it remorse or joy, desire or abandonment, craziness or purity, in this intoxication which leads to awakenings full of bitter disillusionment.

The Paradis artificiels also allows him to share some brilliant thoughts on art, poetry and the misery of existential crises.

The second part of the book is a series of commented extracts of Thomas de Quincey’s work : Confessions of an English Opium-Eater.

This work of compilation but also of critical clarification allows the reader to understand the subtlety of Baudelaire’s literary genius.

No one knows what is more admirable about this work : the pertinence of his analysis, the rigorous way it is undertaken or his fluid style ; obviously the author’s first criteria in regards to his writing is that it be simple and natural. One can also admire his rare intelligence, here used to analyze his experiences with a tact and measure that render them exemplary.

Untrimmed, partly uncut, under its original wrappers, as issued, in a rare and sought-after condition.