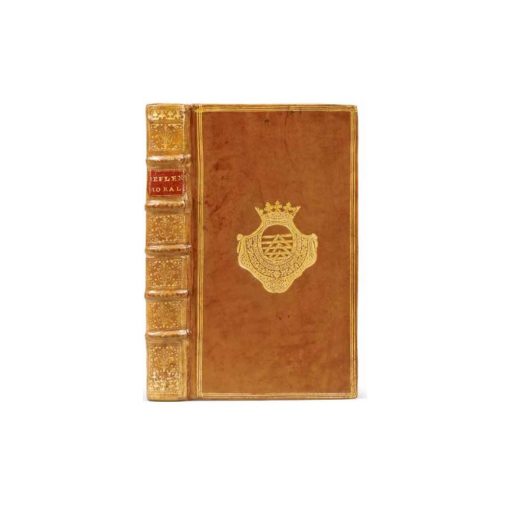 Partly first edition of the Maximes by La Rochefoucauld.

Benjamin Franklin owned a copy of this edition.

A precious copy preserved in its contemporary binding
with the arms of Louis-François-Armand de La Rochefoucauld.

From the library of the château de La Roche-Guyon,
with the library’s seal.

Partly first edition of the Maximes by La Rochefoucauld, enlarged with the remarks by the abbot de la Roche.

It contains 504 Maximes by the author.

“Published anonymously, the Réflexions ou Sentences et Maximes morales employs maxims as a new way to think moral life. Its brief and voluntarily paradoxical form becomes a tool that enables the investigations of the psyche. All of modern psychology is here in the making, including the idea of the subconscious.”

“This small collection was rapidly read ; it gave people the habit of thinking and enclosing their thoughts in a precise, effective and delicate way. It was a merit that no one had before him, in Europe, since the Renaissance of literature.” (Voltaire)

After having fully participated in the Fronde, François duc de La Rochefoucauld (1613-1680) became, as early as 1652, “a beautiful spirit and a lucid, profound and disillusioned observer”.

“The world he evolves in is the one of the court — he has more or less returned to grace, had been granted a pension by Louis XIV and was bequest the order of the Holy Spirit. But more so it is the world of the literary salons, Mlle de Scudéry’s, Mlle de Montpensier’s and especially Mme de Sablé’s. Disillusioned, caustic, laconic, La Rochefoucauld finds his place here — and it is an honorable one — because of his fondness for the word plays and mind games that were in such favor. In 1664, the publication of the Réflexions ou sentences et maximes morales, unbeknownst to the author, created a great scandal. The system it exposed and the merciless tone adopted by the moralist went beyond what was allowed in mundane conversations, even playful ones — conversations that were at the origins of the Maximes in form and practice. Mme de La Fayette herself, who later became a great friend of the author, was frightened ; she wrote to the marquise de Sablé : “Ah ! What a corrupt heart and mind one must have to be able to imagine all that !”

A precious copy preserved in its contemporary binding with the arms of Louis-François Armand de La Rochefoucauld de Roye (1695-1783).

The duke de La Rochefoucauld, who represented one of the most illustrious families in France, counted among a long roster of distinguished ancestors François de La Rochefoucauld, the author of Réflexions ou sentences et maximes morales. His famous collection of axioms was one of the more popular French books that found their way in translation into many libraries in the former colonies. Jefferson had a French edition at Monticello. Benjamin Franklin had a copy of the 1737 French edition. At le Château de La Roche-Guyon, the duke operated a model farm. Jefferson visited the château in 1785. During the American war, with the help of his friend Benjamin Franklin, La Rochefoucauld had translated the various American state constitutions.

Provenance : Library of Louis-François Armand de La Rochefoucauld (arms) and of La Roche Guyon, with the library seal on the title leaf.