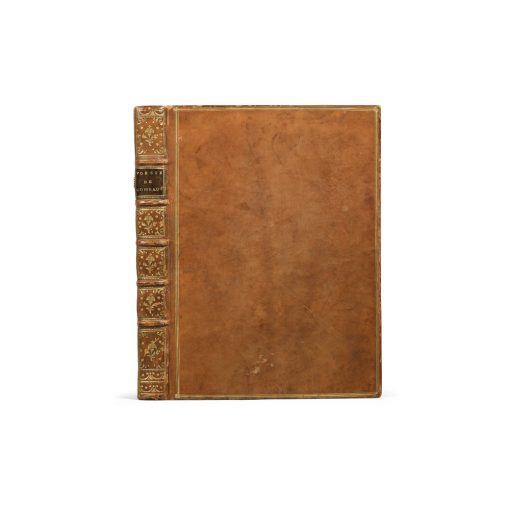 It is decorated with a beautiful title with vignette engraved by Picart.

A disciple and friend of Malherbe, “Gombauld is one of three poets Boileau thought capable of writing two or three faultless sonnets among thousands”. (Catalogue de Backer)

Born in Saintonge, in a Huguenot family of mediocre fortune, Jean Ogier de Gombauld went to study in Bordeaux. A short time after the assassination of Henri IV, he goes to Paris where he quickly receives recognition and esteem. Under the regency of Marie de Medici, he becomes one of the queen’s favorites, which allows him to travel and make himself known throughout the kingdom. He spends time with Richelieu’s opponents but the Cardinal still considers him with praise. He gives him a pension and helps him become one of the first members of the Académie française, elected in 1634.

In 1646 is published a collection of sonnets and epigrams, Les Poésies, which were well-received by his contemporaries and brought him the reputation of being one of the masters of the sonnet of the 17th century, as Chapelain notices in 1662: “He speaks with purity, spirit, ornament, in verse and in prose, and is not ignorant of Latin… His main quality lies in his verses where he appears refined and polished.”

At the end of the volume of the main collection of lyrical poems composed by Jean Ogier, sieur de Gombauld, there is a section of “Sonnets chrestiens”.

Here is a man of letters of the reformed religion, perfectly integrated in his community, and whose production never followed any of the criteria established by the Reform concerning artistic matters. He is not the only one but, amongst poets, he is the most highly praised.

“Gombauld was a good poet. No excess, no great airs, Gombauld has a very accurate sense of the music of his sentences, metaphors, lighting and atmosphere.” (Henri Coulet, Le roman jusqu’à la Révolution)

“Tallemant des Réaux says in his Mémoires that Marie de Medici had had some sentiments for Gombauld.” (Catalogue Edouard Rahir)

A precious copy, preserved in its contemporary light-brown calf.

The Backer copy, with worm holes, had a modern binding.