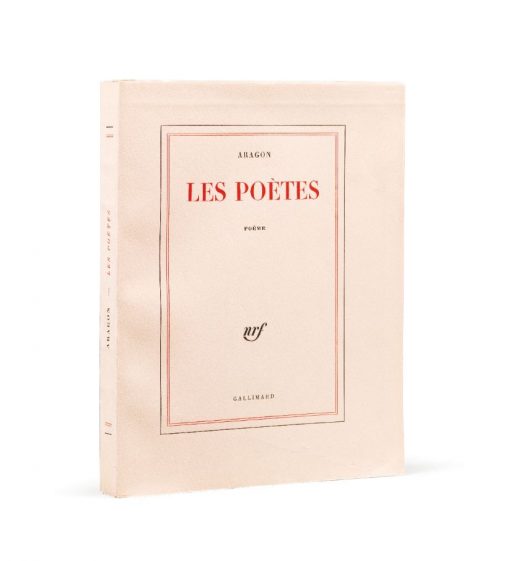 First edition of Poètes by Aragon.

One of 30 leading copies, on Dutch wove paper.

A beautiful copy, uncut, in its wrappers, as issued.

In its wrappers, uncut, as published, case by J. Lauricella.

One of 30 leading copies, on Dutch wove paper.

At first, it is a fragmented evocation of a certain number of poets ; but more than the poets themselves, it is about the strange power of poetry, of this perpetual rebirth of the world itself and of history through the invention of rhymes and images.

The last part, « Le Discours à la première personne », tells of the 20th century poet caught between himself and history, and ends by a shout-out to those who will come after, the young poets and the future writers.

Les Poètes mentions in three different texts the name of the author of the Fleurs du Mal : this collection from 1960 marks the moment when this poetical reference is at its peak.

This affirmation coincides with the homage indirectly given to the poet of the city, the one from Tableaux parisiens.

In Les Poètes, « Quai de Béthune » and « Les Feux de Paris » associate the calm and melancholic backdrop of the île Saint-Louis with the nostalgic memory of Baudelaire.

Aragon’s poetry is lyrical before all else ; rising from theses verses is a song, a protean song that covers many different voices and an infinite range : song, romance, bel canto, the tenor’s magical vibrato, tune, mass, oratorio, ballad, etc.;  what is lyrical in these poems is what sings ; it is also the adventure of an individual who reconfigures his existence thanks to « the black and white song of rimed verses » (Les Poètes). There aren’t many poetic works that, like Aragon’s, ensure us that we are hearing a voice from beyond all evolutions and breaks ; a voice that creates unity.

Through the Poètes’ testamentary voice, written by Aragon in his characteristically abrupt fashion, everything becomes larger : the poem takes on the dimension of a whole book where Aragon unfolds a « great show » ; the traditional verse is in competition with the new verse, too rimed and truncated for one to even call it a verse.

Through such handling of the poetic code, the voice has found a way to overcome it.

A beautiful copy, one of the 30 leading copies, on Dutch wove paper of this literary first edition, uncut, preserved in its wrappers, as issued.