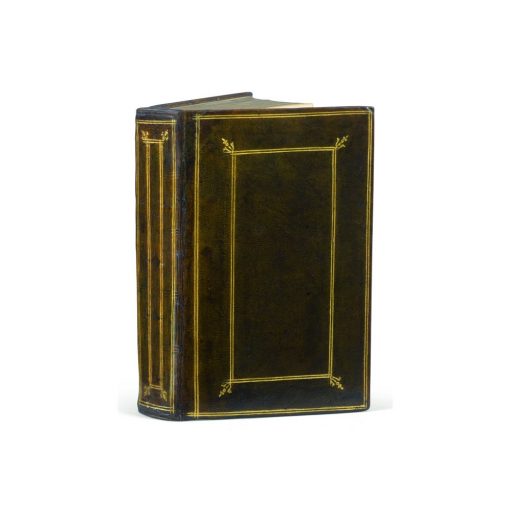 The Œuvres by Desportes
preserved in its contemporary morocco,
a condition practically impossible to find.

Tchemerzine, who mentions numerous copies,
mentions none in contemporary morocco sold after 1918.

The most sought-after edition of Desportes ; the last to be published while he was still alive.

“One of the most beautiful editions of his poetry.” (Brunet)

Brunet, J. Lepetit, Tchemerzine both recognize this edition as being beautiful and esteemed.

On the title is a small mark by Mamert Patisson with the motto “Noli altum sapere, sed time”.

Protected by Henri IV after having been one of Henri III’s advisor and close collaborator, Philippe Desportes represents an important transition between the Pléiade and Malherbe.

Attacked by Malherbe, and defended by his own nephew Mathurin Régnier, it is nonetheless true that Desportes is a sort of precursor of Malherbe in that he sought to simplify vocabulary and write clear and vigorous prose.

Six years before his death, the abbot of Bonport decides to assemble a definitive edition of his first works.

He entrusts this job to one of the greatest Parisian printers of his time, Mamert Pâtisson, who had wed in 1578 the widow of Robert II Estienne, for whom he worked as a proofreader, and who had become the king’s printer that same year.

It is in these terms that La Croix du Maine would judge the successor of the Estiennes, depositary of the brand “à l’olivier” : “He only chooses good copies written by intelligent men, and he prints them quite correctly, with a nice font, on good paper and with wide margins, which are all signs of perfect printing ; in such, he does not stray from the Estiennes, whose house he has allied himself with.”

This edition distinguishes itself by the finesse of the italics and the elegance of its presentation : margins, font, fleurons, decorated initials at the head of every piece.