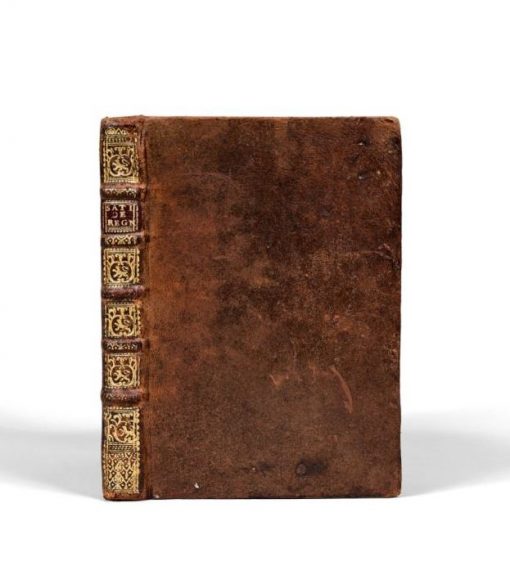 “The greatest satirical poet of the French language at the time of Henri IV.”

preserved in its old armorial binding.

Brown granite-patterned roan, richly decorated ribbed spine with arms of the “Lion passant”, mottled edges, small marginal tear on the last three leaves without loss of text. Armorial binding from the end of the 17th century.

In fact, the three first editions of Regnier’s Satyres (1610 with X Satyres – 1612 with XIII satyres and 1613 – the present edition with XVII Satyres) are of the utmost rarity.

Among these three editions, we have, in more than thirty years, only catalogued one copy of the 1608 edition, in modern binding, thus described by the bibliographer “Le Petit” :

“This edition of Régnier is of the utmost rarity. It contains only one Discours au Roy and ten satires (Satyres I à IX ; and XII). Other than the literary interest this first edition presents of one of our greatest satirists, we can consider it a “bibliophilic” curiosity of the first order. We know of no other copy in personal libraries than the one present, among other treasures of the same kind, in the collection of M. le baron de Ruble. The Bibliothèque de l’Arsenal owns one copy.

We find no trace of this book in recent public sales. One thing is certain, it has tremendous value.”

“Mathurin Régnier is not only a great satirical poet from the beginning of the 17th century, he represents like no other the spirit of the classical satire in verse, even in the eyes of Boileau, who will humbly seek to be his disciple. He was born in Chartres, in 1573, at a time when the Wars of religion were at their peak. His father, Jacques Régnier, was appointed alderman in 1595. His mother, Simone Desportes, was the sister of the famous Philippe Desportes, who would play a decisive role in his career. Desportes taught the young man the bases of the poetic trade and never ceased to give him advice and encouragement. During his dispute against Malherbe, Régnier proudly declared: “Je vay le grand chemin que mon oncle m’apprit” (Sat. IX, v 96). Mathurin was tonsured in 1582. Then he entered, with the help of his uncle, into the service of the cardinal François de Joyeuse, who was appointed in 1587 protecteur des affaires de France à Rome. Régnier managed to gain the friendship of influent protectors like Adrien de Montluc, the comte de Caramain, through whom he was maybe introduced to the subversive ideas of Giulio Cesare Vanini. He also frequents the baron de Fourquevaux, who belonged to the house of queen Marguerite, the painter Martin Fréminet or Philippe de Béthune, the brother of the ministre Sully, whom he met in Rome.

Régnier ended up leaving his cardinal, apparently in 1605. He settled in the Parisian region. He often visited his uncle Desportes’ sumptuous house in Vanves, whose poetical authority is being questioned by François de Malherbe. Invited to Vanves, at the end of 1605, Malherbe offended Desportes, declaring he would prefer his soup to his Psaumes. Régnier was charged by his uncle of righting this wrong: he gave it his all and wrote the splendid Satyre IX, followed by the Satyre X, which organized the resistance of Ronsard and Desportes’ disciples against Malherbe and his new school.

The collection of the Satyres published in 1608 propels Régnier at the head of the Ronsardian clan, but also of all the impertinent comical poets of the time. Appreciated by Henri IV, Régnier also seeks the protection of the poet Jean Bertault, of the young abbot de Beaulieu, son of the maréchal de France, Jean de Lavardin, and most of all of the marquis de Cœuvres, one of the king’s closest advisors. Cœuvres recruited our poet to write a series of elegies destined to enable the love affairs of the Vert-Galant. Through him, Régnier obtains from the king a pension of five thousand pounds. He then becomes a sort of official poet.

He spends the end of his life mostly at the abbey of Royaumont, as part of the circle of Philippe Hurault de Cheverny. It’s probably there that he wrote Macette, la Satyre XIII and his last texts. But he falls gravely ill. He stops writing satires and starts writing his moving Poésies spirituelles. He dies on 16 October 1613.

As a poet, Mathurin Régnier achieves one of the objectives of the Défense et Illustration, meaning the creation in French of a classical satire in verse on the model of the work of Horace, Persius and Juvenal.

Régnier’s success is that he managed to create a poetical space where, starting from common ideas on morality, he can freely give way to his taste for frankness and freedom. He develops an esthetic of the mood, of nonchalance and of whims, that he puts in the service of friendship, but which he also considers a tool of individual emancipation in the libertine sense. For lack of exposing some wisdom, he stages a temperament, turning the poem into a place and a ferment of humor and pleasure. This vital and tonic impulse characterizes his comical verve. His realism comes from the fact that he is, before Baudelaire, a poet of the city. He submerges us in the sweet noise of the social comedy. Even though he doesn’t know where, Régnier is a “force that goes”: man has at least the power to oppose to the absurdity of life the energy of his humor and the pride of his nonchalance. Like the greatest satirists, Régnier is a poet of his time, always upsetting us but also always inserting us into the movement and emergence of the days.” (Pascal Debailly)