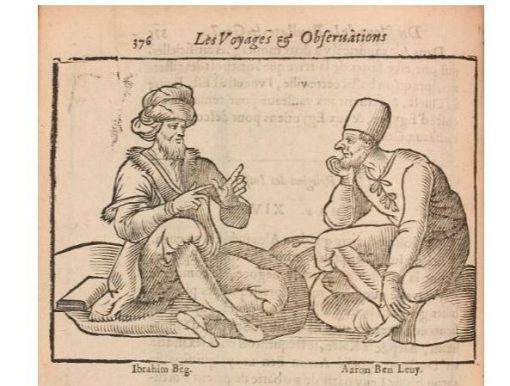 One of the rarest first editions of the author’s trips to the Middle East and the Indies, illustrated with 34 very interesting woodcuts.

Not in Tobler, Blackmer or Schwab.

The largest part of the book deals with his travels through the Middle East and India. In 1643 La Boullaye-Le Gouz travelled the Middle East under the name Ibrahim Beg, visiting Syria, Palestine, Persia, Egypt, Anatolia and Armenia. A few years later he was sent by the French king with an embassy to the Mogul emperor Shah Jahan, where he met and became great friends with the Jesuit Alexandre de Rhodes (1591-1660). La Boullaye describes the routes he takes, the cities he visits and the people he meets along the way, with frequent observations on religion, natural history and commerce.

The illustrations show various Indian deities, some city views or buildings, Indian and Eastern costumes, plants and trees. Pages 243-255 deal with plants, fruits and trees in India, including several palm trees, a fig tree, a jack tree and a melon tree.

“The work is notable for its information on northern India and its relations to Persia, and for its inclusion of a summary of the Ramayana” (Howgego)

François Le Gouz de La Boullaye, a traveler born in Baugé (Anjou) in 1610, and who died in Isfahan around 1669, came from an English family. He entered the service of Charles Ier, visited Ireland and then the banks of the Baltic and Mediterranean seas, passed through Constantinople by way of Isfahan and Bender Abbassi in India (1662), then went to Persia (October 1664), where he died.

His trip started in 1637 in the river port of Dijon. The travelogue left by La Boullaye was dedicated to the cardinal Luigi Capponi, the librarian of the Vatican Library, to whom he offered a copy of his text. This tale from afar reveals a tireless quest for adventure and knowledge. This text was forgotten for three centuries, in a lost tomb near Isfahan. But Ibrahim Beg, a gentleman from Anjou, relives these episodes for us. We see him in the souks of Tabriz or Ahmadabad, the churches of Mossul or Goa ; we hear him converse with the Maronite patriarch on mount Lebanon, with Rabi Aaron in Alexandria. Every step leads us towards an Orient that he dreams to be always further : let’s follow him !

A precious and very rare volume with wide margins.