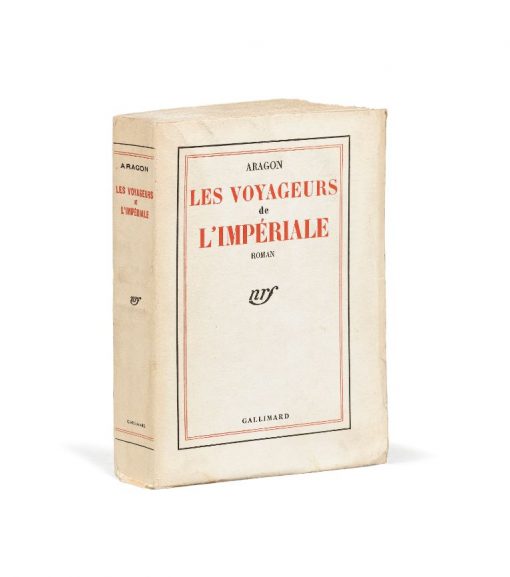 First edition of the Voyageurs de l’Impériale by Aragon.

One of 29 leading copies
on pur fil wove paper from the Papeteries Navarre
and one of 4 copies off the market.

Uncut, preserved in its wrappers, as published.

In its wrappers, uncut, as published, case by J. Lauricella.

« Aragon wrote most of the Voyageurs de l’Impériale between October 1938 and August 1939, and the last hundred pages in the Chilean embassy in Paris where he and Elsa Triolet had found refuge after being threatened by right-wing extremists. On March 14th 1940, Gaston Gallimard sent the text to the printer’s but the proofs were destroyed in a fire. The novel ended up being first published in the United States at the end of 1941, in an English translation. In France, the Vichy regime was opposed to its publication. The censorship commission finally agreed to it on Septembre 18th 1942. » (Wolfgang Babilas)

Les Voyageurs de l’Impériale embarks us on a trip starting at the 1889 World Fair and ending at the First World War.

Jean Paulhan had correctly guessed, in a very intelligent letter to André Gide written April 2nd 1940, that what Aragon intended with the Voyageurs de l’impériale was to write « a novel that was to psychological novels what Don Quixotte was to chivalric novels, that is a novel to finish all novels, to elevate them, ridicule them (a bit) and, at the same time, give them their slightly desolate accent.

« In the Voyageurs de l’Impériale, the style, beautiful and diverse, adheres, with a most Stendhalian charm, to the movements of each action, each character ; it gives an impression of almost infinite agility and depths. » (Dictionnaire des Œuvres)

Aragon’s poetry is lyrical before all else ; rising from theses verses is a song, a protean song that covers many different voices and an infinite range : song, romance, bel canto, the tenor’s magical vibrato, tune, mass, oratorio, ballad, etc.;  what is lyrical in these poems is what sings ; it is also the adventure of an individual who reconfigures his existence thanks to « the black and white song of rimed verses » (Les Poètes). There aren’t many poetic works that, like Aragon’s, ensure us that we are hearing a voice from beyond all evolutions and breaks ; a voice that creates unity.

One of the 29 leading copies on pur fil wove paper from the Papeteries Navarre and one of 4 copies off the market of this literary first edition, uncut, preserved in its wrappers, as issued.