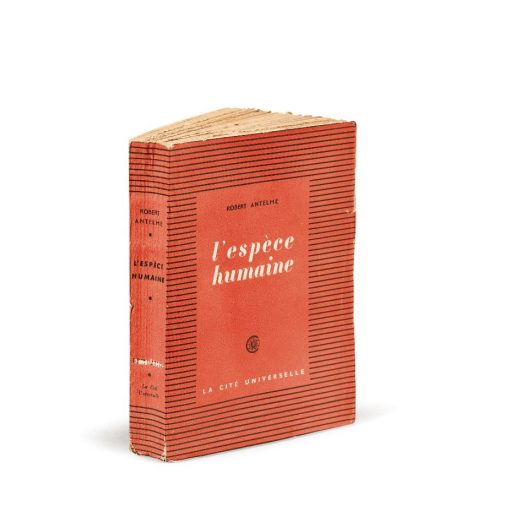 preserved in its contemporary wrappers, as issued.

« Published in 1947, Robert Antelme’s L’Espèce humaine is today considered one of the most essential works of literature on concentration camps. » (Martin Crowley)

« Many books published after 1945 deal with the war that just ended. All in all, one essential question stands out : what is the worth of European culture if it was able to give birth to such horrors ? How is it possible for the western humanist tradition to continue after such a barbaric episode, especially since it didn’t come from the outside but from inside old Europe ? Literature lives on, but what shape will it take ?

In 1947, Robert Antelme published « l’Espèce humaine ». It is the testimony of the months of suffering he endured as a prisoner in Buchenwald and then Dachau. Through his personal experience, he tells the story of those who, like him, were reduced to mere numbers, whose humanity was denied. It is not just a personal account. A new form of storytelling emerges from this ordeal, challenging the art of writing to represent that which cannot be told and forcing human beings to grasp the essence of their condition, of their « species ». For Robert Antelme, the camps showed how the prisoners found the will to survive by claiming they « would remain humans till the end ». (Denis Labouret)

A work by Robert Antelme (1917-1990), published for the first time in 1947 before being republished ten years later on the insistence of Albert Camus, this book is unique because of the incredible significance of its message, which surpasses what one may expect to find in a testimony like this. « I am reporting what I have lived through », the author warns. What he has lived through : a year in the camps of Germany, in Buchenwald and Dachau, where he was sent because of his opposition to the regime. The first lines of the novel contain precious indications: « Two years ago, during the first days that followed our return, we were, all of us I think, victims of madness. We wanted to speak, be finally heard… But it was impossible. As soon as we started talking, we would suffocate. Even to us, what we had to say was beginning to seem « unimaginable ». » Being able to talk but not being able to say, the fear of betraying or of not being heard, give this testimony the tenacious sobriety and accuracy of an account that seems stolen from death. The author writes from inside the camp, through himself but not about himself. A testimonial work, not the work of one writing his memoirs. With each word, it is the experience that weighs, in all its unspoken weight. An impossible situation where all hope of revolt is banished and where survival is the only objective. (Dictionnaire des Œuvres)

« A master-piece of white writing », this harsh narrative, whose strength lies in its sobriety, immerses us in the narrator’s conscience. In opposition to the Nazi’s attempts at dehumanization, he tried to claim that he resolutely belonged to the « human species ».

A precious copy preserved in its contemporary wrappers, as issued.

Only one copy listed in the national public institutions : BM Lyon.

Missing in the  BnF.